We always appreciate the opportunity to introduce horror fans to new authors. From law enforcement to now author, Merrill David recently released his first book ‘Wicked Awake.’ It seems  like a great read during these times of quarantining and social distancing. So please take a few minutes to get introduced to this clever new book, and learn a little about Merrill…

-PH: Please start by telling us what ‘Wicked Awake’ is about. Is this more of a virus story, zombie/mutant story, or a little bit of both?

-Merrill: Wicked Awake is actually both of those things! In my novel, the protagonist, Jake Hathaway, was once a Captain in the Marine Corp. He then goesW on to be a Sergeant in the Dallas Police Department.. But soon afterwards his life begins to spiral out of control due to things he allowed himself to be exposed to in his past. Back in his Corp days, in the government’s military effort to create the ultimate fighting warriors, they (along with Jake, who was their poster boy for the project) created an experimental drug. A horrific virus which changes humans into monsters was born. As a result, everyone whom Jake and his Marine Corp were commissioned to protect have now become endangered by the very same people. What started in just parts of the U.S. is soon spreading through the country like wildfire. And what follows is an Infection Armageddon, with pandemic conditions turning humans into non-living beings who do not realize they should be dead. Its a post-apocalyptic world that feels oddly similar to what we are experiencing now with the Covid19!

-PH: How did you come up with the idea for this story? Guessing you had this idea before everyone found themselves quarantined at home. Does your story have any similarities to what we are currently going through?

-Merrill: For years I have played with the idea of writing a zombie novel! I have always loved horror shows and movies. And my favorite horror flavor has always been zombie. I love to consume all of the Walking Dead and zombie movies I can get my hands and eyes on! So one day about six years ago, I was conversing with my family about something we had just seen. I began telling my wife and kids how the story could have been better (I recall mentioning to them that in my opinion, the zombies in World War Z were way too fast! Because everyone knows the REAL DEAD are slow! Am I right? Just ask George Romero). So my wife suggested that since I was such an expert, I should write my own novel. At first I thought she was joking, but she wasn’t. So I did it!

-PH: What more can you tell us about your main character, Jake Hathaway? How did you come up with his character? You had a career in law enforcement. Did that have any influence on what happens in the book?

-Merrill: I definitely do believe that my Law Enforcement career influenced my writing style. Just as any author, I think we write about what we know about. I think anyone who has been or is still currently in Law Enforcement would be able to read my work and know that I actually lived it and didn’t just research it up. As a result, my protagonist, Jake Hathaway, was a Marine and then goes on to become a Dallas Police Officer. He promotes to be a Sergeant and is also a training officer, then a K9 handler. Another of the featured characters is a rookie officer, Kelvin “Mack” McElroy, who was trained by Jake. I include several scenes in the novel based upon things I or my co-workers actually experienced. I also touch a little bit upon how being a police officer has changed over the years. Right after the 9/11 tragedy, cops and firemen were considered to be heroes. Parents encouraged their kids to wave at us and be friendly with us. Nowadays cops are hated and targeted. Firemen are still loved (apparently I chose the wrong career), but not the police. Kids are told to question all authority, especially Law Enforcement. And I get it, I think politics and some of our past leaders are partly to blame, although I’m not going to act like I don’t realize there are some very bad officers out there who have done some really fucked up things. In my book I mention one seasoned training officer in particular who acts as if he is untouchable, above the law. But for every bad cop like that exists, I would say there’s another ninety-nine who are honest and professional. That being said, I don’t want readers to think that my whole book is all just zombies and cop talk. I think they will be very entertained as well!

-PH: What books or movies would you compare your book to?

-Merrill: Some of the books that Wicked Awake may draw a comparison to could be Michael Crichton’s Andromeda Strain, Max Brooks’ World War Z, Mark Tufo’s Zombie Fallout. And as for movies, I would say my book is like the love child of Dead Pool and the Punisher, with a little Zombie Land thrown in as well. Hell, there may even be a dash of that old television program “the Incredible Hulk” (with Bill Bixby and, of course, Ferrigno) sprinkled on top for some extra flavor.

-PH: What were some of your challenges writing the story?

-Merrill: Actually, the actual writing of the story was the easy part. The real challenge has been everything since then! Sending out over a hundred emails and queries to literary agents and publishers only to be rejected by some, those who at least had the courtesy to respond. Many of them don’t reply at all. These big name publishing people pimping their mainstream vanilla projects, afraid to put something different out there. Not all of them are that way, but IMO the majority are. So I published the book myself. And now the promotion / social media aspect of getting the news out there are quite difficult. I’m not great with social media, don’t really understand a lot of it. But I have a couple of daughters in their 20’s who are doing their best to coach me up!

-PH: Not sure if this is a spoiler or not, but is this a stand alone story or the first of a series?

-Merrill: When I wrote Wicked Awake, I intended for it to be the first story of a trilogy. If Wicked Awake had tanked, I might have gone on to pursue a different story line the next time around. But the book is selling well and I have people asking me and hoping that there will be more Wicked Awake to come. So I am currently working on WICKED AWAKE 2, probably about a third of the way done. I left a lot of unanswered questions from book 1, so a lot of those will be answered. And if all goes well, there could be a part 3. But I also have a couple of other ideas in mind, so we shall see which direction I lean. And my longer-term goal; I would love to see Wicked Awake turn into comic books or a film… just in case anyone from Marvel is reading this right now…

-PH: When and where will fans be able to find your book?

-Merrill: My novel is available on Amazon, my website 1merrilldavid.wixsite.com/wickedawake also has a link directly to Amazon where you can purchase the book. It is available in ebook and paperback, free ebook for those who have kindleunlimited !

-Merrill: I really love all types of horror and Sci-Fi. I have always enjoyed watching those type of programs on TV and going to the theater or renting movies (I’m aging myself – for those who remember Blockbuster). I was always very into Marvel Comics (never got into DC for some reason) and horror novels. Some of my favorite television programs were the Incredible Hulk (with Bill Bixby and, of course, Ferrigno) and the Twilight Zone, as well as reruns of the original Planet of the Apes movies (not really feeling the re-makes).

Some of my favorite movies were the Friday the 13th series (until Jason went into outer space, then they lost me), Halloween, Freddy vs Jason was greatness! I also loved Nightmare on Elm Street, The Fly with Jeff Goldblum, Fire in the Sky (an alien abduction film that was supposedly based on true events), those bizarre Faces of Death films. I also dug the People Under the Stairs, the Ring, the Strangers, the Saw movies, the Hellraisers, The Exorcist, Jeepers Creepers, Joyride. And of course everything zombie; Evil Dead, World War Z, Zombie Land, Shaun of the Dead, I Am Legend, Army of Darkness. 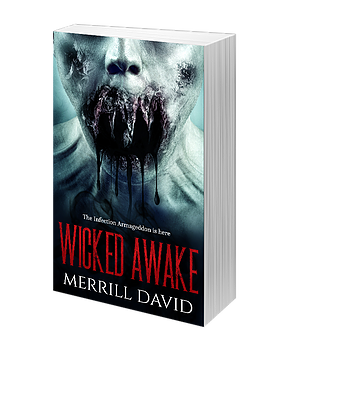 -PH: Here’s your chance to promote anything we haven’t talk about. Let us know something more about your book, future projects, life outside writing, or anything else you would like to mention.

-Merrill: I’m hoping if the world ever gets back to normal to possibly make some public appearances in the Dallas/ North Texas area. Also, people can follow me on Goodreads and these other fine outlets as well;

We would like to thank Merrill for taking the time to answer our questions. Hopefully this gave you some insight into his new book, and you will give it a read. Again, get your copy today at Amazon, and don’t forget to follow Merrill on social media!