Matt Schorr – a podcaster, columnist and self-described Halloween mega-enthusiast – is returning to Kickstarter on May 26 with the third issue of his horror comic, Moby Dick: Back from the Deep.

This marks his third venture on the crowdfunding site. His first two outings saw successful funding for issues #1 and #2. He hopes to continue that success. 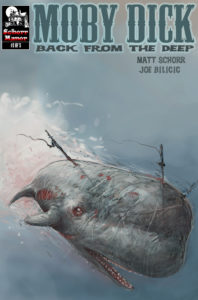 Moby Dick is back

Moby Dick: Back from the Deep is a story about the white whale reappearing in modern times as a zombified beast roaming the seas and bringing chaos and destruction to anyone unlucky enough to be in its way. In Matt’s tale, that happens to be the beachfront community of White Sands Beach.

“The story unfolds around Katherine Barlow, a teenager who’s father recently lost the mayoral election,” Matt explained. “It was an ugly election, and the nastiness was felt by Katherine and her family just as much as her dad. So now, her father is just trying to finish out his term in the midst of the anger and hatred coming at him.”

Then, Moby Dick shows up.

Matt’s horrifying high seas terror tale began, and in fact continues, as a webomic. He published the first pages more than two years ago in 2018. Since then, he’s endeavored to publish a new page every week.

“We’ve occasionally paused in between issues,” Matt said. “That way we could focus our efforts on Kickstarters. We took a longer pause this year because of the pandemic. Both artist Joe Bilicic and I wanted to take a moment to see how things played out.”

The webcomic is available at www.backfromthedeep.com.

“Everyone’s welcome to read it there for free,” Matt said. “Of course, I’d also love for them to order copies on Kickstarter too.”

Matt’s hometown of Clarksville, TN, likely knows him best as the weekly humor columnist of The Hard Way in the Leaf-Chronicle newspaper. He calls it the ongoing saga of learning exactly what not to do in life.

“It’s all about the trials and tribulations of a new father with two little ones,” Matt explained, “and the seemingly endless ways I manage to fall on my face trying to figure out what in the world I’m doing.”

Matt writes within the genres he loves. He’s a dedicated comic book fan, with multiple shelves and boxes collecting adventures of Superman, the Green Arrow and the Teenage Mutant Ninja Turtles. Likewise, he loves Star Trek and all things science fiction.

And, of course, horror.

Matt first honed his skills as a writer while working with the Mayfield Messenger newspaper in Mayfield, KY. While there was never breaking news about zombified sea beasts or undead sailors (those also appear in his comic), he began developing his craft for the first time at a reporter’s desk.

“There’s no teacher like experience,” Matt recalled of his time at the community paper. “You can only learn so much in classes. As valuable as that is, as important as that is, nothing teaches you professional writing like writing professionally. For me, that was crime reports, courtroom drama, local politics and the occasional theater review.”

He further developed his craft at the Leaf-Chronicle, where he shifted responsibilities from writing to editing, before at last developing his weekly column.

Writing is his life

Writing remains the centerpiece of Matt’s career. He currently works with the Meharry-Vanderbilt Alliance – an office combining the resources of Vanderbilt University Medical Center and Meharry Medical College for various research projects – as Communications Specialist. In that role, he pens press releases, announcements and promotions about the Alliance’s ongoing efforts to improve health in the community.

Asked when he started writing, Matt answered, “As soon as I started learning to read. My parents have a picture of me as a child on vacation at the beach, and I’m writing a story on a paper towel about sharks attacking people.”