Anubis Press is excited to announce the release of AMERICAN CRYPTIC- TRUE STORIES OF THE STRANGE AND UNCANNY by author and filmmaker Jim Towns, now available on Kindle and in paperback. 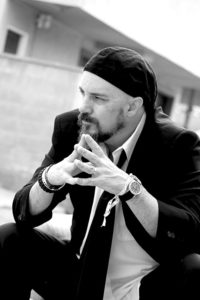 -PH: Why a book on urban legends, Jim?

-Jim: Writing is about mining facts for raw material, and creating new myths out of that. So the chance to go back and examine some of the creepier myths and folk tales that influenced me as a kid, hold them up to the light and try to suss out what actual history they were based on was an instant ‘yes’ for me.

The book has three parts: Ghost Stories is about strange encounters I’ve had personally, as well as some creepy experiences related to me by trusted friends. Boogeymen gets more into the urban legend realm- or maybe ‘rural legends’ would be more accurate. The chapters here investigate famous local legends from Western Pennsylvania like the Green Man, the Six-Toed Man and Indian Peter: again dissecting both the legend part and its historical basis, and comparing the two. Finally Uncanny Places gets into some locations in the area with sinister pasts or hidden histories- because as any filmmaker knows, location is also a character in any good story.

-PH: When did the idea come to you?

Jim: I wrote accounts of creepy encounters I’ve experienced for two of Anubis Press’ previous books, Paranormal Encounters and Handbook for the Dead. Jacob Floyd reached out to me towards the end of last year about the possibility of taking those two tales and creating a standalone book around them. I jumped at it, but I’m not any kind of ghost hunter or anything, so I chose to broaden the subject to all kinds of unusual history. The book’s purpose isn’t to convince anybody on the existence of the supernatural or anything- but to present the reader with some odd instances and little-known histories, and allow them to bring their own context to those stories.

-PH: And it’s all based on legends in your hometown, is that right?

-Jim: The stories are mostly based around Pennsylvania, yes. A few friends contributed stories that take place in California, Georgia and even Scotland.

-PH: How does American Cryptic differ from other books?

-Jim: Well it’s fully illustrated by me, so that’s different. Also again I think it’s more of an anthropological approach to folk tales, and delves into the history of many of these stories, so it walks a fine line between being speculative non-fic and having some small type of scholarship, I hope.

-PH: And is the book something you’d like to translate to the movie screen at some stage?

-Jim: Before I started the book, I’d already written a screenplay about the legend behind one of the book’s chapters, and used much of the research I’d done for it in that section. Of course the film version takes a much more fanciful approach to that particular story. Hopefully I can shoot it in the next couple years.

-PH: The scariest horror novel of all time is…?

-Jim: I grew up a horror kid, so not much in the way of that genre really terrifies me. But the monstrous side of humans is something that does- there’s a book by David Morrell called Testament that I read a few years back- about a journalist who publishes a story about the powerful leader of a militia, and the militia relentlessly hunts him and his family down as they flee into the mountains. It was written in 1975 and I think they’re finally making it into a film. Not surprising since I doubt the story will ever be more tragically relevant than right now.