A Deliciously Campy But Disturbing Thriller… 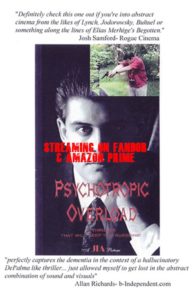 Psychotropic Overload is a deliciously campy but disturbing thriller that’ll keep you guessing. Steven Callahan is a well respected therapist has just taken on a new client named Christian who’s an aspiring fashion photographer who suffers from a series of bizarre and violent fantasies. As the fantasies become more vivid Steven becomes suspicious these are more than just random thoughts. Simultaneously, foul mouthed detective Tim Poroski is faced with a series of murders and disappearances of several male models. as the plot tightens Steven and Christian become involved in a deadly game of cat and mouse that leads to a wildly unpredictable conclusion.

“perfectly captures the dementia in the context of a hallucinatory DePalma like thriller… just allowed myself to get lost in the abstract combination of sound and visuals”
Allan Richards- b-Independent.com

“able to affect me on a deeper level… different than anything I’ve seen lately, and in this case that’s a good thing!”
Ron Bonk- Alternative Cinema

“Alexandre has a wacky twist and imagery that puts a spin on his effort… interesting, and added just the right amount of deranged highlights.”
Paul Zeis- Filmthreat.com

“Definitely check this one out if you’re into abstract cinema from the likes of Lynch, Jodorowsky, Buñuel or something along the lines of Elias Merhige’s Begotten.” Josh Samford- Rogue Cinema
www.roguecinema.com 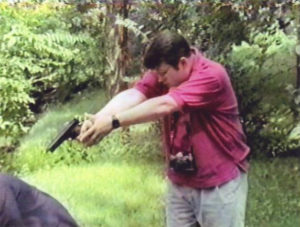 Watch this fascinating film today at:

-Read about the team at JFA Films

-Find more of their films

One thought on “PSYCHOTROPIC OVERLOAD”