Campfire Radio Theater has been manufacturing “fear for your ears” over the past 9 years, utilizing a full cast of first rate voice talent and cinematic sound design. This award-winning anthology of horror continues to provide audio chills that harken back to a bygone era of radio while wrapped in a thoroughly contemporary package that is as dynamic as a modern film soundtrack. Each episode is a full stereo production and quality earbuds are recommended but be sure to leave the lights on! Select episodes are recorded with a bloodcurdling 3D binaural process and certain effects and voices might just jump out and grab you!

Most Campfire Radio Theater episodes are original tales written for audio by producer John Ballentine but adaptations are featured as well from the likes of well-respected and varied authors like Joe R. Lansdale, Wyllis Cooper, Bill Gray and H.G. Wells. Each story is soundscaped with immersive effects and scored by composer Kevin Hartnell. There’s plenty to sink your teeth into! 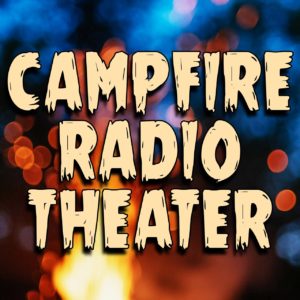 According to writer-producer John Ballentine, Campfire Radio Theater is much like a collection of short horror films made specifically for audio. “In essence, we’ve switched the projector bulb off and all you’re left with is a dark room and sound. No visual element but you can let your mind fill in the blanks and paint the terrifying pictures. We just take care of the soundtrack. After all, the monsters lurking in the dark recesses of your own imagination are likely a lot scarier than anything I could put in a movie.”

So join us and have a seat by the fire!