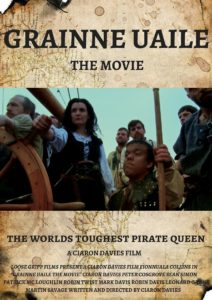 This year “Grainne Uaile – The Movie” will be released from its ship in Ireland and sailing the festival circuits. A 3 hour epic, written and directed by Ciaron Davies telling the true life story of Irelands infamous pirate queen, starring Fionnuala Collins in the title role, the movie was shot on location all over Ireland, North and South, on land and sea.

A violent and gritty retelling of the life of Grainne Uaile, the 16th century Pirate Queen from Ireland. She was a fighter, a pirate and a tough woman, carving her mark in a man’s world. This exciting film is violent, dark, brutal, exciting and often darkly comic. The ultimate female action hero steeped in ancient Irish history. 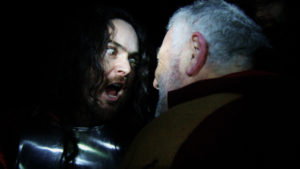 “Grainne Uaile-The Movie,” is an epic historical adventure based on the real life of 16th Century Irish Pirate queen, Grainne Uaile. It is a savage, ruthless and gritty film exploring the life of this extraordinary woman, who made a huge impact in the ‘16th century Man’s World’ and also left a large imprint in Irish and world wide history, her name became infamous, and her life the stuff of legends.

It follows her life from her early childhood, her youthful years as a clansman’s wife, her subsequent career in piracy, politics, intrigue, double dealings, her fight against the powers of the English state and her famous meeting with Queen Elizabeth.

“We wanted to make a stylish and historical movie that was exciting, dramatic and full of adventure, with moments of high intensity and emotion. It was very important for us to show the character of a strong woman in this movie. To move away from the typical stereotypes we have seen in recent years, where women are portrayed as either victims or love interests. The pirate Queen is presented as a tough woman, well able to hold her own with the men she commands. She has a feminine side too. It was very clear that we wanted to present a strong empowered woman who an audience would identify with. This is a real story about a real female warrior. One of the most important women in history.”

Often violent and merciless, with moments of black comedy, Grainne Uaile has the look of a ‘moving Caravaggio painting’ and the style and atmosphere of a Celtic Western. The fighting is closer than any other film you will see, fast paced and fierce. We wanted to create battle sequences where the audience feels involved. Grainne, herself is presented as a very strong woman, fiercer than the men around her, played beautifully by Fionnuala Collins, who exudes a mixture of charisma, style and ferocity.

Filming was grueling and tough, taking place through the Irish spring to Winter and Post production for this savage epic was completed during the 2020 pandemic.

We wanted to make a movie like the old epics of times gone by, brimming with story, life and characters. It was also important that all the actors performed their own stunts and swordfights. The battles themselves are often elaborate and full of tension.

Filming was grueling for the actors and daily shooting was tough and physically demanding, often out in the middle of nowhere in the freezing cold, battling the elements, the cameras rolled during incredibly harsh conditions, everyone had their physical abilities pushed to the very limit. No trailers, no toilets, no electricity, often filming took place in barren and remote locations during incredibly harsh Irish winter months, which gives a great sense of gritty intensity and high drama.

GRACE O MALLEY TAKES ON THE MIGHT OF THE ENGLISH (CLIP)
https://youtu.be/FYiJVAOYTA4

A wonderful and large cast, the movie also features Peter Cosgrove, Leonard G. Tone, Patrick Mc Loughlin, Robin Twist, Sean Simon, Mark Davis and Martin Savage and Ciaron Davies. Following the life of Grainne Uaile herself, the men in her army and also Queen Elizabeth and her English generals, we get to experience a medieval world first hand, an elaborate weaving of character based lives and dramas which paint what is a very complicated story, that of medieval Ireland, a time of war, double dealings, violence and treachery. A bold mix of characters, they will make you laugh and cry in equal measure. The complex drama and story is interwoven with intense battle scenes, where the action is handled impressively by the actors themselves (no stunt doubles) and we are close into the violence with the camera.

Grainne Uaile – The Movie is a roller coaster of a ride, set against the rich and complex tapestry of 16th century Ireland, and spanning 70 years of intrigue, drama and violence on both land and sea. The Pirate Queen herself is a tough, highly intelligent and hard woman, one of the toughest we have seen in cinema. Her enemies are equally as tough and her nemesis, Richard Bingham is a suitably twisted villain, somewhere between Genghis Khan and Hannibal Lecter.

Richard Bingham, the bloody instrument of the Queen and Grainne Uaile’s nemesis is an evil and twisted character, ruthless and cunning, a deadly combination of insanity and master strategy. A serial killer General with a sword.

This bold movie explores, in detail, the life of this extraordinarily complex woman. It will be hitting the festival circuit in the coming months. Check out the films production company site, Facebook and IMDB here

Trailers of Terror: “The Nun”