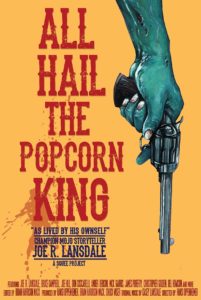 All Hail The Popcorn King has been touring the country and will be released wider over the coming months.

Official Synopsis : All Hail the Popcorn King trailer about writer Joe R. Lansdale who’s written over 50 novels and 500 short stories including Bubba Ho-Tep. Cold in July, The Drive-in, the Hap & Leonard series. Joe is also a Master in Martial Arts and created his own technique. He’s well known for his unique voice andhis generosity and support of other writers and filmmakers.

Hansi Oppenheimer is an independent filmmaker and the CEO of The Squee Project, a media network supporting representation, feminism & diversity in pop culture. We encourage collaboration not competition.
Hansi is the Producer/ Director of:
All Hail the Popcorn King : The Joe R. Lansdale Documentary
Squee Fu: Fans Celebrate the Return of Joe Bob Briggs
Squee! Identifying as a Fangrrl
Squee! Costuming, Cosplay & Identity
She created and produced
Color Me Obsessed; A Film About The Replacements.

She produced the fan-centric creative event SqueeCon 12/18, produces a podcast, The Grr in Fangrrl on semi-regular basis on BlockTalkRadio, has produced fan film festivals and is currently touring with her latest documentary All Hail the Popcorn King.