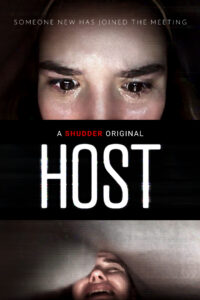 Host is the story of six friends who hire a medium to hold a séance over Zoom during lockdown, but they get far more than they bargain for as things quickly go wrong. When an evil spirit starts invading their homes, they begin to realize they might not survive the night. The film stars Haley Bishop (Deep State), Radina Drandova (Dawn of the Deaf), Edward Linard (The Rebels), Jemma Moore (Doom: Annihilation), Caroline Ward (Stalling It) and Emma Louise Webb (The Crown), who also operated their own cameras, helped pull off their own practical effects, and lit their own scenes. 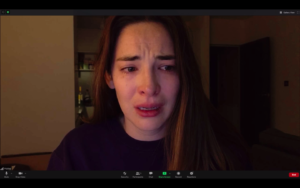 Rob Savage – Writer, Director & Exec Producer
Rob wrote, directed, shot, co-produced and edited micro-budget feature film STRINGS at age 17, which premiered at the Rome Film Festival. The film was acquired by Vertigo Films and released via the BFI. Rob won the Discovery Award at the British Independent Film Awards for the film, the youngest director ever to win a BIFA. He was named a Screen International Star of Tomorrow for the film.

Rob is currently developing a number of TV and film projects including a supernatural thriller for Studio Canal, psychological horror SEAHOLM with the BFI, SALT with Chernin Entertainment, DAWN OF THE DEAF with producers Rob Watson & Fodhla Cronin O’Reilly (Lady Macbeth) and Eric Heisserer (Arrival), & RAWBLOOD a horror series with Natalie Dormer producing and starring.

Rob is a Sundance and Berlinale alumnus and has won a number of awards for his short films at festivals including the London Short Film Festival, Raindance and Sitges and was the recipient of the BFI Future Film Award in 2011. Rob’s 2017 film, DAWN OF THE DEAF was BAFTA shortlisted and has played at over 100 film festivals worldwide, including the Sundance Film Festival and Oscar- Qualifier Sitges, where it won the Melies D’argent for Best Short.

Jed Shepherd – Writer & Exec Producer
Jed Shepherd is a filmmaker who grew up in South London and is a die-hard horror fan. He is currently working with Rob Savage on feature film versions of their Sundance favourite DAWN OF THE DEAF and award-winning short SALT.

Jed directed the upcoming short MULTIPLEX that is currently on the festival circuit following a premier at Glasgow Film Festival in early 2020.  The film stars Lewis MacDougall(A Monster Calls/His Dark Materials) and Victoria Yeates(Fantastic Beasts/Discovery of Witches), plus the five lead girls from HOST.

Gem Hurley – Writer
Gem Hurley is a British screenwriter who grew up in London, drawn to wondrous worlds and relationship driven stories with an elevated genre twist.

Gem is currently staffed on various shows including the upcoming tech horror series RED ROSE (Eleven Films / BBC / Netflix) and the supernatural crime thriller THE RISING (Sky Studios). Alongside this she is developing her own projects including the paranormal drama TIN FOIL (Eleven Films, UKTV) while collaborating on the retro-futurist sci-fi drama – THE HUMAN HAPPINESS PROGRAM (Working Title Films).

Her horror feature THE RULES THAT KEEP US SAFE landed her in the top 10 female writers for the Nicholl Fellowship in 2018, while her sci-fi thriller pilot AWAKEN was long-listed in the Austin Film festival’s competition. Previous to this Gem collaborated on various comedy and fantasy plays at the Edinburgh Fringe festival and off-west end.

Douglas Cox – Producer
Douglas is a Scottish producer with a focus on delivering internationally appealing genre films and series. He is developing a strong slate with some of the UK’s brightest filmmakers, including projects with Kate Herron (Sex Education, Loki), Emily Greenwood and Mustapha Kseibati (Screen Star of Tomorrow).

With a background in high-end TV, Douglas has produced BAFTA shortlisted and Méliès d’Argent winning genre shorts, notably Rob Savage’s horror trilogy of ABSENCE, DAWN OF THE DEAF & SALT and Kate Herron’s body-shock comedy SMEAR. Counting LFF, Sundance and Canneseries among 200+ festival screenings, his films have gone on to be featured by Vimeo Staff Pick Premiers, Nowness, Short of the Week and as part of BBC Scotland’s ‘Next Big Thing’.