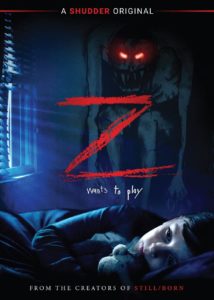 RLJE Films, a business unit of AMC Networks, has picked up select rights to Z from Shudder, AMC Networks’ streaming service for horror, thriller and the supernatural. Z will be released on September 1, 2020 on VOD, Digital HD, DVD and Blu-ray.

Directed by Brandon Christensen (Still/Born) who co-wrote the movie with Colin Minihan (What Keeps You Alive, Grave Encounters), the horror film stars Keegan Connor Tracy (Final Destination 2), Jett Klyne (The Boy), Sean Rogerson (Grave Encounters), Sara Canning (War for the Planet of the Apes), Stephen McHattie (Watchmen), and Chandra West (White Noise). RLJE Films will release Z on DVD for an SRP of $27.97 and on Blu-ray for an SRP of $28.97.

In the film, when Beth’s (Keegan Connor Tracy) son (Jett Klyne) brings home an imaginary friend named “Z,” she becomes concerned that he is falling too deep into a world of make believe. He starts to display extremely destructive behavior, blaming Z for all of his actions. But after he gets kicked out of school, Beth is forced to find a solution. She medicates her son, making him unable to see his imaginary companion. But now Beth sees Z…and he wants to be her friend.

The Digital HD release will include an iTunes Extras package that features an audio commentary with director Brandon Christensen, Behind-The-Scenes interviews with the cast and crew, never-before-seen deleted scenes and outtakes, and an insider’s look at the music, the incredible VFX, shooting with an actual train and how the filmmakers achieved the notorious “Stair Scare.” 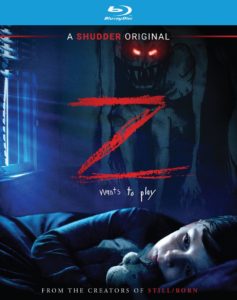 · Behind The Scenes of Z