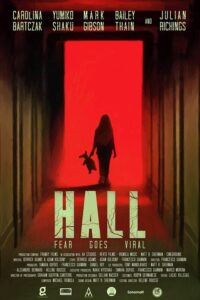 The anticipated Canadian horror thriller about a scary virus outbreak will be available to a worldwide highly curated audience during the virtual festival held exceptionally this year in August 2020.

“I’ve known about Frightfest UK for years as one of the leading genre film festivals in the world. Having Frightfest select my directorial debut feature film ‘Hall’ is a tremendous honor. I couldn’t have imagined a better event to host our World Premiere,” says director Francesco Giannini.

HALL tells the story of Naomi, a Japanese runaway wife, and Val, a helpless young mother, both struggling to escape an abusive relationship as well as a hotel hallway, which has been infected by a mysterious airborne virus killing everyone rapidly. In this isolated and despairing space, fear becomes viral as the women run for their lives. In the face of contamination, is there hope at the end of the hall?

Encountering the special circumstances around the pandemic happening in the world right now, HALL coincidentally captures the intrinsic sense of dread that people in society are experiencing yet in an even more visceral manner.

“It’s a strange coincidence that our film is coming out at the same time as the devastating Covid-19 crisis,” says director Francesco Giannini. “I never thought that the fictional story of virus contagion we’ve created in ‘Hall’ would become a reflection of reality within such a close time frame between the release of the film and the pandemic occurring right now. However, the ideas and themes explored in the movie have been in my thought process for a while due to the previous virus outbreaks I’ve had witnessed,” he adds.

This highly stylized genre film, blending mystery, suspense, and sci-fi elements, is part of a new horror franchise that Franky Films is developing out of their studio in Montreal, Canada.

Francesco Giannini is a Montreal based Canadian director and producer, founder of Franky Films. He has directed a number of award-winning shorts including The Flare, which premiered at the 2016 Fantasia International Film Festival. More recently, Giannini took on his first major film project as Executive Producer & Producer with the psychological suspense horror Woodland Grey, directed by Adam Reider. He would simultaneously produce his directorial debut with the psychological horror Hall, slated for a 2020 premiere. Furthermore, his previous experiences as an actor, cinematographer and editor have all helped him hone his craft as an author storyteller, combined with his ability to turn projects with minimal budgets into movies lauded for their high production value. Giannini currently has two other scripts in development, both finalists at the Academy Nicholl Fellowships Awards and official entries of the highly curated Black List in Hollywood.

For more information on Hall and Franky Films, please visit the following links: