Fright-Rags celebrates 45 years of Jaws with exclusive merchandise from the classic film, along with new apparel from American Psycho, Vampira, and UHF. 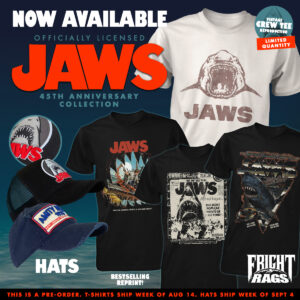 Commemorate Jaws’ 45th anniversary with Fright-Rags’ reproduction of the vintage tee worn by the crew during the making of the film. Quantities are limited! Plus two new designs, a bestselling reprint, and Jaws and Amity Island hats. 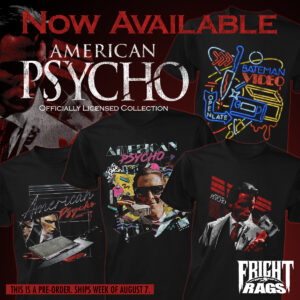 It’s hip to be wearing Fright-Rags’ American Psycho apparel. Return some videotapes like Patrick Bateman in any of the four shirts, including a pair of ’80s-inspired designs.

Tune in to The Vampira Show with Fright-Rags’ collection dedicated to the first horror host. Vampira is featured on two shirts, an enamel pin, and a pair of socks.

Jaws, American Psycho, Vampira, and UHF collections are on sale now at the newly-renovated Fright-Rags.com.