A motherland that weeps for her sacrificed, lost, drowned, dead children.

With the words “If you cry, I’ll kill you” ringing in their ears, Alma and her kids are murdered in Guatemala’s armed conflict.

Thirty years later, a criminal case is brought against Enrique, a retired General who oversaw the genocide. But he’s acquitted through a mistrial and the spirit of La Llorona is unleashed to wander the world like a lost soul amongst the living.

At night, Enrique starts to hear her wailing. His wife and daughter believe he’s having bouts of Alzheimer’s-related dementia. Little could they suspect that their new housekeeper, Alma, is there to mete out the vengeance the trial did not. 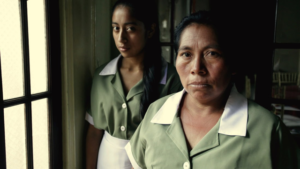 LA LLORONA is one of the most widely knownhorror legends in Latin America. It tells the story of the sorrow, desperation, mourning andconsequences of one woman’s erratic decision.

An indigenous woman abandoned by her husband moves on with her life and has two sons outside of marriage. The unexpected announcement of her husband’s return forces her to take measures in order to redeem her status as a married woman. She drowns her children, only to commit suicide when she regrets it. God then punishes her to wander the world as a lost soul, weeping and searching for her two sons. Her wailing terrifies all who hear it.

Unlike the legend, our Llorona is placed in today’s world. She weeps for her children who died during Guatemala’s armed internal conflict. Far from being a victim of social morality, she is a woman seeking revenge. 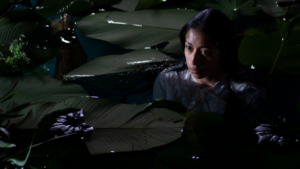 When I was a boy, the idea of hearing the cry of La Llorona during the night terrified me. I pictured her to be a demonic soul who, because of her sins, was condemned to lament and wander the world. I was told that hearing her was a sign that she knew I too deserved punishment. What surprises me now is the power that she still has in Guatemala and in other Latin American countries. Despite knowing it is nothing more than a moralist myth for mandating the behavior of women, a large part of the population believes in her existence. The cry of guilt, of moralism and of a chauvinist society still echoes in our ears.

Creating a new version of La Llorona is the perfect opportunity to try to change those stigmas that are etched into our cultural inheritance. At the same time, the psychological suspense that goes along with the character allows me to recount Guatemala’s recent, dark history to a national audience that is generally more interested in purely commercial entertainment movies. Like in all beginnings, films that address true events of a painful history are classified as bad publicity for a country.

Taking a land—or a people like the Guatemalan one that has lamented so much—and comparing it to this myth seems more than natural to me. It was thus also easy for me to justify using the horror genre to talk about the bloodiest former dictator of Latin America.

This film mixes together the story of the killings during the armed conflict in Guatemala, former president Efraím Ríos Montt being condemned for genocide and seeing it annulled, the Sepur Zarco case of crimes against humanity, the domestic and sexual slavery of native women, misogyny, classism, religiosity, mysticism and magic realism. All these ingredients create an amalgamation of suspense and terror that surpass the legend itself.

I needed to captivate interest internationally, but above all that of my people, and so I began this journey by going back to my childhood fears, to my new fears as an adult and my interest in storytelling. A cinematographic way of denouncing, all under the guise of entertainment, without ever losing sight of universally recognized auteur cinema.  -Jayro Bustamante

New Poster for “Lake of Shadows”

One thought on ““La Llorona” Comes to Shudder August 6th!”