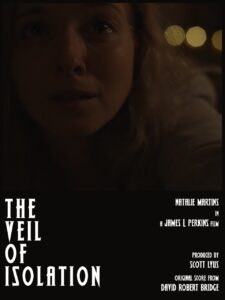 After the country is put into lockdown, a young woman shares her experiences with the world in the form of a video diary – however as the world descends into darkness and her paranoia grows, it becomes clear normal life will never be the same again.

Writer/Director James L Perkins says, “I wanted to use film and more specifically, technology such as a camera that we use on a day-to-day basis, to tell the story of one woman whose normality is slowly ripped away from her and how she would deal with that massive change in her life. Taking some of my own experiences and the fears of others, I set out to craft a compelling character-driven thriller that is relatable whilst also being enthralling”.

Produced by Scott Lyus, the filmmaker behind festival hits Silently Within Your Shadow, Echoes of the Passed and most recently Black Mass, the film stars genre favourite Natalie Martins of Cruel Summer and The Barge People fame, and has caught attention for all the right reasons.

The film is currently on Kickstarter and has got off to an incredible start. Over 60% funded in their first week and trending number 1 in the horror films category.
If you’re interested in joining the team, hit the link below and grab yourself one of the many awesome perks up for grabs. There’s a perk for everyone, from completed film links, all the way to Associate and Executive Producer perks.

And given the festival hits and successes of all involved we have no doubt this is one project to keep an eye on.