We love when we find musicians out there who also have a love for horror. Satanic Panic ’81 songwriter Brian Burdzy has been a long time horror fan, and found a way to use horror to influence his music. We were interested in finding out how he was able to combine his two passions, and got a chance to talk to him about how he did it, and more. We invite you to learn a little about him, his latest album, and more… 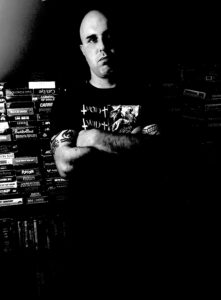 -PH: Before we get to the new album, please tell us a little about yourself.

-Brian: My name is Brian. I live in Southeastern Connecticut. Satanic Panic ’81 is my project now. It started out as a duo, but after the first album, my partner and I parted ways amicably and so I compose, track and publish these songs from my attic. My formative years were spent in the punk/hardcore scene in rural Northern Jersey, but even so, I have always had a fondness for film scores, as well as other types of music like goth, industrial, instrumental, metal, post-rock, electronic etc.

-PH: So I’m curious, what came first your love for music or horror?

-Brian: My love for music came first, but from an early age I was fascinated by horror. When I was super young, my older cousin put on a really scary part of Friday The 13th part 3, and then turned all the lights off in the basement and locked me down there. I was terrified, but whenever a scary movie was on channel 11 or on late night TV when I should have been sleeping, I watched it anyway. Some of them I still love and watch annually. The Friday movie I mentioned is actually my second favorite one of the franchise, behind Jason Lives. I distinctly remember watching Vamp, Monster Squad, Lost Boys, Nightmare On Elm Street 2 was my first Freddy movie because it was on cable.

As I got older, I got way into punk and hardcore. Pretty much made it my way of life before I was a freshman in High School. So with my walkman and my bike, I would ride out to the highway and rent VHS tapes. The guy who ran that place would let me rent the basically anything except the softcore porn that was behind the curtain, so I would have to basically rent two tapes. One would be something sorta friendly. PG-13. Something that if my parents asked to see it, I could show it to them and not worry. Lots of 80s/90s action films. Van Damme movies, Dolph Lundgren. There was a Frank Stallone one too. It was really bad. But the other one would be some gory shitshow that i would have to put on after they went to bed, or when they went out. Faces of Death, Death Spa, Bad Taste, Bad Lieutenant, Cat People. I did this basically every week. We lived kinda out in the middle of nowhere. All my friends lived way on the other side of town or in another town altogether. My siblings and I were more or less latch key kids because both my parents worked and we had extra curricular. It was pulling teeth to get them to take me to a friends house. Needless to say, I got comfortable entertaining myself with music, movies, books and video games.

-PH: How did you get started making music?

-Brian: My freshman year, I started hanging out with this kid from school. He had a cheap guitar. We decided we would start a band. We basically wrote really bad songs and then played them between punk covers that we liked. We thought we were the best band ever. We totally sucked, but it got me comfortable in front of people, and the dude who played bass in that band is still one of my best friends to this day. After that I was in a slew of bands, all different genre mashups, but defiantly within the vein of punk/hardcore.

-PH: When did you decide you wanted to include horror in your music instead of taking a more traditional approach?

-Brian: The dude who used to do this project with me kinda floated the idea to me. He and I played in a band together back in the mid 2000s. This was back in 2017… which seems like forever ago. At the time I was living down south. I drove to a guitar center, bought a cheap midi keyboard, and started writing. Other than writing some crappy punk songs on guitar, I had never fleshed out a full song prior to that. Plus I have no musical training, so trying to learn how to use the computer programs, which is what i was using at the time, and put stuff together… it was taxing. We finished the demo and pressed it, and once people took an interest, I was really happy. I guess you can say that up until that point, being in traditional bands just wasn’t working. I put out this demo and floated it to a few independent directors and next thing I know they are asking me to write things for their short films. I liked that reaction, so that’s why I stuck with it. 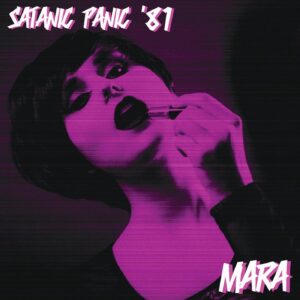 -PH: Please tell us a little about your new album MARA.

-Brian: I started writing for this album very quickly after the last album, The Sacrifice Hunter was released. I wanted to improve on that and I wanted to incorporate some post-rock/post-punk influences. Me partner and I couldn’t agree on the direction of where to go so we split up, and i just continued to write. In my head, I envisioned a goth girl turning vigilante and going after crooked cops, so I sorta just stuck with that. I asked my friend Pete to design the cover art, then my friend Adam did the layout. I tracked it at the end of October and early November of last year, but spent a ton of time, reworking a few things, manipulating sounds, etc. My friend Tommy of Police Navidad played Bass son a bunch of songs, as well as guitar on a track called Mercy. My friend Paul from a band called Hundreds of AU added some guitar to a track called Walking Free. When it came time to send this to mixing/mastering, I had to cut a couple songs. So now its 9 songs and like 42 minutes of music. Fits nicely on LP.. which was always the goal.

-PH: What’s different about this album as opposed to some of your other work?

-Brian: I think the songs are a lot better on this one. I spent a lot of time, not only writing them and tracking them, but I also spent a lot of time messing with audio units and recording software. Just learning how to do it as best I could. I also got a ton of advice some friends, the biggest of which was from Matt Akers, who does what I do and he’s extremely talented. I envied some of the sounds he was able to get, so I just hit him up on social media. We became friends I guess and we text pretty often now. He’s really good at what he does. I appreciated his help.

I think the other thing thats different, is that this album was written with some intention of playing this all live at some point. Once that seed is planted in the music, the songs sorta swing that way because you think to yourself “what can I do to take people standing on a dance floor in a bar feel like they are part of an experience?”

-PH: Are there any specific music and/or horror influences that went into this album?

as for films The Crow, The Craft, Tank Girl, I Spit On Your Grave, Deathwish, Mandy, Blue Ruin 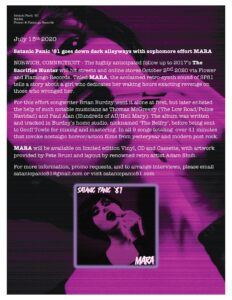 -PH: Take us behind the scenes, and talk about what went into creating this album?

-Brian: I almost quit on this whole project ten times. I was getting extremely frustrated with some of the sounds, some things I didn’t now how to fix, the amount of time it was taking, writers block for weeks at a time. It was a really difficult thing to make this happen. Lots of self loathing, self hate and self destruction. Thankfully I have a family who cares about me enough to encourage me to work through it. I also would be up until 3-4 in the morning drunk off my ass holding people hostage by making them text me and give me advice on how to do a better job recording stuff. Thankfully, they are still my friends. I’m really hoping the next album comes together a little better.

-PH: If there is one song fans should listen to on the album what should it be?

-Brian: Thats a tough one. Mercy is a fun song. I think it captures my love for Depeche Mode without ripping them off and has a sexy and sweet vibe about it. No More Pain is one of the songs I’m most proud of.

-PH: Going back to your previous music, have you done music for any movies? Is that something you would like to do more of?

-Brian: I did one feature score already. The film isn’t out yet, but it’s called The Dead Girl In Apartment 03. Adrienne King is in it. She was in Friday The 13th, and considering that I grew up near the area that it was shot, it was a pretty full circle moment for me to be a part of that. I loved doing it, so yes, I would love to do more film scores.

-PH: What’s next now that this album is finished?

-Brian: The album will be available on 10/2. Right now, I’m putting together a couple songs for a split release that is sorta up in the air right now, but I’m confident we will get this done.

-PH: Here’s your chance to promote anything we haven’t talked about. Let us know something more about the album, where we can find it, previous albums, or anything else you would like to mention.

-MARA is available for pre-order on limited Pink Vinyl, Lavender Cassette and CD at satanicpanic81.com and satanicpanic81.bandcamp.com. You can also pick up some of the other releases there. I did a pretty cool looking flexi single a few months ago for a web show called Mondo Creepy TV. All the merch and shit is located at those two sites.

We would like to take Brian for taking the time to answer our questions. For those who like some horror in their music, we hope you’ll take a listen to his music, and check out the new album. Don’t forget to head over to his site to sample some music, and pre-order the album!