Play to be given a staged Zoom reading on Thursday August 27th at 7:00PM BST as a part of Thornhill Theatre Space’s World Wide Virtual Fringe Festival, streamed live on their Facebook page https://www.facebook.com/ThornhillTheatreSpace/ .

“When we had to cancel the festival due to Covid 19, we were unsure how to present the new writing contest winner given that in person rehearsals were no longer possible,” said London Lovecraft Festival cofounder T.L. Wiswell. “But when Thornhill approached us about their virtual fringe festival, exclusively featuring original works, we realized we had the right venue to do shows in the format we can produce. Tupper’s imaginative script, which is both timely and suited to the style of presentation available to us in the post-Corona world, was perfect for where we are now, as a festival, as an audience, and as people who have all sat through far more Zoom conferences than we ever expected.

“The offer from Thornhill Theatre came to us in the post-George Floyd world, and the issue of racism in HP Lovecraft’s work was very front and center for us. Tupper’s script didn’t dance around it: it faced it front and center. In fact, it was so intense we requested he amend the script to take out some really shocking quotes – we aren’t going to be platforming the racism of early 20th century America. But we do think it’s a perfect time to present a play about modern people confronting our racist ‘heroes.’ I’ve always known Lovecraft was a ‘troubled’ author, but the anthologies I’ve read have steered away from his uglier works. I think audiences will like this play, though, because it DOES shine a light on the truth of his beliefs, but it’s also a fun horror story. And if you have a deeply developed sense of irony, you’ll smile knowing our lovely cast would make HP twitch on the icy cold slab in the temple beyond the stars where he lies waiting.”

Upon winning Vulcanello’s Writing Lovecraft award, Devin said, “it was so exciting when I got the news. Lovecraft’s work is such an influence, and as someone who relishes the genre he helped to create, it’s such a privilege and responsibility to be able to engage with that work and address its troubled history. In some of my more experimental works, the worlds of From Beyond and The Colour Out of Space Time are always at the forefront of my mind when looking to great examples of truly imperceptible, alien life. With everything going on in the world, I, like many people, did not expect that the play would be able to survive once lockdown started. But I am so grateful to Vulcanello Productions for standing by their award and for working with me to adapt the play to fit around current safety guidelines and present it in its current form.” 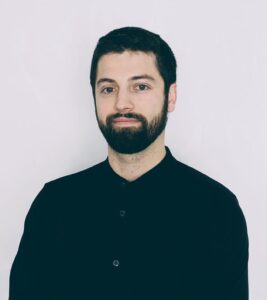 Putting on a show as a “made for Zoom” performance has stretched the London Lovecraft Festival’s production team, but with this one under its belt, more shows could be coming. “We’ve got a pile of scripts that were submitted for the festival, and it’s possible that we could do a small festival of all-original horror plays, doing a few of the shows that were submitted to the festival as staged readings, adding in ‘The Racist in the Chat,’ and maybe doing a rewrite of my script for ‘Asenath’s Tale: The Thing on the Doorstep’ so that it’s Zoom calls instead of visits for tea. I think as long as theaters are shut audiences will be eager for this, and as a writer I’m eager to be creating again.”

For those who have attended the festival in the past, “The Racist in the Walls” has a lot of familiar faces. Natalie Morgan has been with it from the start, starring in 2018’s “Mountains of Madness” and “The Thing on the Doorstep: Asenath’s Tale” as well as the staged reading of “Albertina West: Reanimator” that took place in 2019. Cathy Conneff worked with Natalie as Professor Dyer in “Mountains” while also taking “Asenath” to the 2019 London Horror Festival. Director Coral Tarran performed alongside Natalie in “Reanimator.” New to the London Lovecraft Festival but much experienced in horror is Paris Rivers, who takes a break from his work in film (and undertaking, see https://www.theguardian.com/stage/gallery/2020/jul/20/my-latest-role-ali-wright-photographer-theatre-makers-key-workers-in-pictures) to trial a new way of working for “the small screen.” Meanwhile co-founder Jason Meininger will move from planning to “post production” as he tries his hands at video editing. “It’s a labor of love for all of us, “ says Wiswell. “We really wanted to have something happen for the festival this year, we all want to be making art, we wanted those writers to see their scripts given a chance to live and breathe. We want things to get back to normal, but we have to do what we can with what we’ve got now. With luck, audiences will find this show and enjoy it in this unusual format.”

Author Devin Tupper bio: Devin Tupper is a firm believer that every story has its perfect home. Trained as a screenwriter, his works now expand across literature, theatre, television, and film. His first feature film, Chapel, was developed and filmed as part of his undergraduate degree and since then, he has continued to hone the craft as a script editor across international dramas. After completing a Creative Writing MA from the University of Warwick where his short story, Depth, received a publication in the writing society’s Kamena publication, Devin continued his editorial work in television while writing his most recent one-act play and debut novel. He is thrilled that his play, The Racist in The Chat, will be making its premier and that his novel will continue its development as part of University College London’s Creative Critical Writing PhD. His works focus on pushing the boundaries of form and genre while crafting in-depth characters that reflect very real societal perspectives.

Director Coral Tarran Bio: Coral trained at Lamda before moving to America to continue her studies at the American Academy of Dramatic Arts. She is a founding member of the multi award winning Mischief Theatre, and one of the creators of their show Olivier nominated show Lights, Camera, Improvise! Directing credits include; Am I Happy Yet? (Lion and Unicorn, Offie nominated 2020), Raise Your Hand If You Want Dad to Die! (Baron’s Court Theatre, writers festival), Nine (Drayton Arms).

Cathy Conneff (“Parker”) Bio: Cathy trained at Bretton Hall College & Drama Studio London. Film and TV Credits include: Coronation Street, Dragonflies Only Live for 24 Hours, The Card Room Chronicles, The Private Live of the Tudors, Sophia Lazzati and On the Edge.
Theatre credits include: the Marilyn Conspiracy (Rehearsed reading at the Park Theatre), Gulliver Returns, Poena 5×1 (Or How I Came to Agree with Right-Wing Thinking), ADA ADA ADA, April in Paris & The Cherry Orchard.

Cathy won best supporting actress in a feature film at the Madrid International Film Festival 2017 for her portrayal of Magenta in Sophia Lazzati and the inaugural Mandy Monologue Competition Actors’ Choice Award.

Natalie Morgan (“Julia”) bio: Natalie is a lover of science fiction and is excited to be returning to the theatrical world of HP Lovecraft, having originated roles in new works at the 2018 and 2019 London Lovecraft Festivals. Previous adaptations include ALBERTINA WEST: REANIMATOR, THE THING ON THE DOORSTEP: ASENATH’S TALE and MOUNTAINS OF MADNESS – all gender-switched adaptations by the Festival director, TL Wiswell.

Since her last outing to Arkham, Natalie has returned to her roots in Musical Theatre, originating the roles of Sue Grubb & Gazza in the award-winning NST production of BILLIONAIRE BOY: THE MUSICAL (dir. Luke Sheppard). She also appeared as a singer in the finale of ON HOPE: A DIGITAL SONG CYCLE, curated in partnership with The Other Palace.

Paris Rivers (“Parker”) bio: A performer who’s background lies mostly in the arena of indie horror and cabaret. Although a comedic compère in most of his roles, he is no stranger to serious performances within horror. In this engagement he is back to form in the latter and is happy to jump into this supernatural and thought provoking tale.