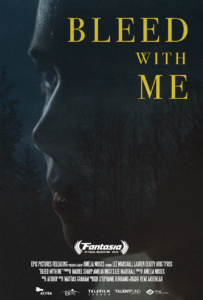 Writer/director Amelia Moses’ debut Telefilm-funded feature film BLEED WITH ME will premiere on August 26 at Fantasia 2020.

In the film, Rowan, a self-destructive and vulnerable outsider, is thrilled when the seemingly perfect Emily invites her on a winter getaway to an isolated cabin in the woods. Trust soon turns into paranoia when Rowan wakes up with mysterious incisions on her arm and becomes convinced that her friend is stealing her blood.
BLEED WITH ME juxtaposes tenderness and violence in an investigation of female intimacy and dangerous codependency.

BLEED WITH ME is a Canadian female-driven feature with arresting visuals and nuanced performances. Programmed by distinguished film journalist Justine Peres-Smith as part of Fantasia’s thrilling 2020 lineup, this psychological horror explores the intersections of admiration, compulsion and obsession. BLEED WITH ME is the debut feature from Montreal-based filmmaker Amelia Moses, whose acclaimed short UNDRESS ME played at FANTASIA 2017’s BORN OF WOMEN selection and an impressive 30+ festivals worldwide. Starring frequent collaborators Lee Marshall (Moses’ UNDRESS ME, UPLOAD:U) and Lauren Beatty (PAY THE GHOST, Moses’ upcoming BLOODTHIRSTY). Produced by Mariel Sharp (UNDRESS ME, DON’T TEXT BACK) and lead actress Lee Marshall, BLEED WITH ME tantalizes with chilling body-horror, leaving the viewer enraptured in visually-stunning suspense. Intimate cinematography, rich sound-design and a gorgeous dark colour palette are what awaits you in this atmospheric genre-bending film.

Details about the upcoming screenings HERE.