After fourteen years, a new volume of the BHF Book of Horror Stories shuffles its way out of the crypt! And this time we’ve been to the movies. This third collection features more than thirty original tales, inspired by and often featuring favourite characters and situations from British fright films:

* The White Worm menaces a northern child, and pursues his victim into old age

* David, Jack, and Nurse Alex avoid werewolves and steer clear of The Slaughtered Lamb, only to discover death lurking on a Greek island

* What happens when a bunch of cannibal chefs congregate to discuss the contents of their next menu? 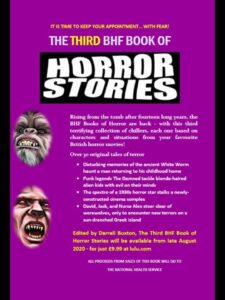