The critic’s choice, horror anthology 10/31: A Halloween Horror Anthology, will finally make its long-awaited digital premiere at the KINGS OF HORROR Youtube Channel, through TERROR FILMS.

TERROR FILMS is set to premiere 10/31 exclusively on the popular KINGS OF HORROR YouTube Channel. Previously released by Scream Team Releasing on DVD, this title will have its premiere on Friday, August 28th at 2pm (PST); this premiere will include a livestream, with several of the filmmakers (including cast) present.

The story has been described by the filmmakers as “a Halloween treat bag full of all the things that go bump in the night with something for everyone.” With segments that feature killers, tricksters, scarecrows and witches, the majority of horror fans will find something entertaining within this release. As well, the stories were developed by some of indie horror’s best and brightest, including: Brett DeJager (Bonejangles), Rocky Gray (The Barn), Zane Hershberger (Force to Fear), John William Holt, Hunter Johnson and Justin Seaman. 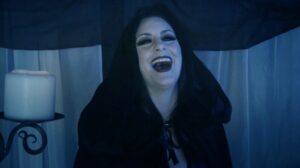 Both the official trailer and poster have been given an update prior to the digital release, which Terror Films is sharing with the fans in advance of the release. The film will be available exclusively at the KINGS OF HORROR from August 28th until October 9th. After October 9th, the film will be released on multiple digital platforms such as Amazon, iTunes, Vudu, Tubi TV and many others.

Founded in 2015, KINGS OF HORROR quickly became the most visited and subscribed channel for full-length horror movies on YouTube, with nearly 1.2 million subscribers and the channel is still growing.

To set a reminder for the premiere, click here:

To learn more about KINGS OF HORROR, visit: https://kingsofhorror.com