When Britain first, at David Cameron’s command, decided to hold a Referendum on its future membership of the European Union, no-one expected the events of June 23rd 2016 to have such a significant impact on the lives of one family in particular and the country as a whole!

The creative team behind “Lonely Hearts” and “The Millennial Killer” (TrashArts Portsmouth) proudly release a short trailer for their upcoming feature film, “Monstrous Disunion”, the next ‘pig’ thing in horror! A twilight-zone style sledgehammer horror which throws a dark light on the battle between Brexiters and Bremainers.

Starring Jessamie Waldon-Day and Martin W Payne, and directed by Jackson Batchelor, “Monstrous Disunion” is set on the day of the EU Referendum and Britain is about to change forever. When Maddie returned home from university with two friends in tow, she expected to clash with her family’s views but had no idea just how bad things would get. Her dad makes bad jokes, her mum makes a fuss, and her hometown seems to be populated by raging, murderous, pig monsters. 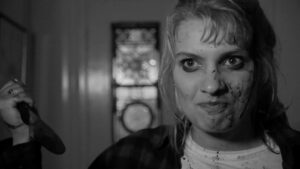 Produced by H B Films Ltd and Trash Arts Ltd. Monstrous Disunion is due to be released at the end of 2020.

You can find out more about Monstrous Disunion on IMDb https://www.imdb.com/title/tt11983318 and the following social media