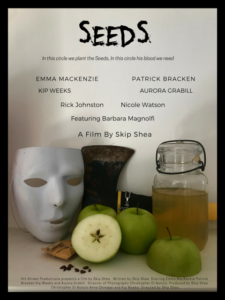 A grieving mother Macha, played by Emma MacKenzie is feeling isolated in her grief and holds onto her Catholic faith while her husband Andrew, played by Patrick Bracken dives into his work as a distraction. Against her wishes he leaves to study an old New England cult, that’s religion is based around the metaphysical properties of the apple.

The secrets of these metaphysical properties that the Cardinal Sinibaldi, played by Kip Weeks, is very interested in discovering for his own use.

As they rush to make these discoveries, the cult has deadly plans of their own.

Written and directed by Skip Shea it was shot on location in the Blackstone Valley which is situated between Providence, Rhode Island and Worcester, Massachusetts. It was also shot in parts of Connecticut using the same locations that were used in LET’S SCARE JESSICA TO DEATH.

It screens on August 30th, 6:30pm at the Screening Room Arts Cafe 1265 Niagara Falls Boulevard Amherst, NY. Tickets, $10.00 are very limited as all proper social distancing practices will be enforced. Seating will be limited to a maximum of 30 people per screening. Masks are required to enter, and are required everywhere except your seat. Tables are spread out for social distancing.

SEEDS has been nominated for three awards at the Buffalo Dreams Fantastic Festival including Best Feature, Best Female Performance for Emma MacKenzie and Best Screenplay for Skip Shea.

Opening the block will be Shea’s short PRIEST HUNTER.