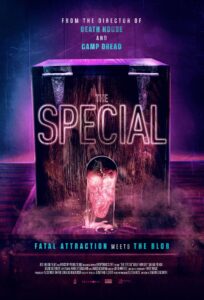 The Special is the latest film from director Harrison Smith (Death House, Camp Dread), which has become his most anticipated following the feedback from preview screenings. With positive feedback from both horror fans and critics alike.

In addition to some powerful performances from the cast and impressive special effects, there has been a lot of interest regarding the films controversial themes which deal with addiction, obsession and a very Special box.

The script has been adapted by Mark Steensland and James Newman from their novella of the same name and serves as a stark warning to the unfaithful.

You can keep up to date with new for the film by following director Harrison Smith on Twitter https://twitter.com/HarrisonSmith85 and The Special on Facebook https://www.facebook.com/givemethespecial/