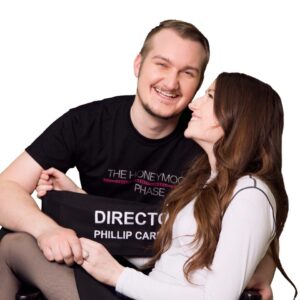 THE HONEYMOON PHASE is a sci-fi psychological thriller following Tom and Eve, two struggling young lovers who lie about their relationship in order to enter THE MILLENNIUM PROJECT, an experiment for married couples run by the mysterious Director and Handler. With the promise of $50,000, Tom and Eve must survive 30-days isolated together in a futuristic smart home, while the researchers attempt to determine why couples fall out of love. Over the course of their stay, Eve begins a violent decent into madness as she questions if her lover really is the man she thinks he is. A paranoid sci-fi thriller about the nature of trust in relationships, THE HONEYMOON PHASE is as much classic Twilight Zone as contemporary Black Mirror, and an all-too-terrifying answer to the question, “How well can you ever really know someone?” 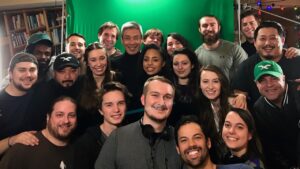 My wife, Chloe Carroll, and I fell in love making short films together. When we decided it was time to create our first feature film, we wanted it to be a labor of love between the two of us. The marriage of my love of dramas and my wife’s love of horror films lead to the birth of our little psychological thriller, THE HONEYMOON PHASE. As a newlywed, I wanted to capture the ecstasy of being in the honeymoon phase while also exploring what can lead a relationship to fall apart. What slithered out of those ruminations was the idea of facade. Why do we pretend to be something we’re not to please another person? Why do we smile when we are sad? Or bite our tongue when we want to speak? For my wife and I, our greatest strength is our friendship is the foundation of honesty that we built it upon. THE HONEYMOON PHASE sows a lie into that fertile soil… a thought so horrifying that once it took root, the relationship would deteriorate – memory by memory. I hope as you watch THE HONEYMOON PHASE in the comfort of your home, the film plants that same seed of doubt in your mind… What if the person I love isn’t who they say they are?  -Philip

The film is available now on Apple TV/iTunes: https://apple.co/2PzMzad and on Amazon Prime Video: https://www.amazon.com/dp/B08BJFMKXM as well as all major VOD platforms.