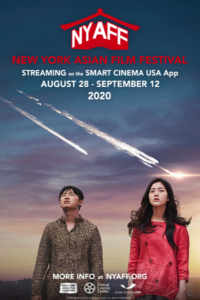 Whether online or offline, the festival continues to highlight women both behind and in front of the camera, and features a specific FOCUS on women filmmakers: WOMEN TRANSFORMING FILM, starting with:

The OPENING FILM – the North American Premiere of The Girl and the Gun (Babae at Baril), directed by Rae Red, led by a superb performance by actress Janine Gutierrez, and produced by Iana Celest Bernardez (in a first-time producing role) and Bianca Balbuena.

The Festival’s programming team went the extra mile to spotlight female talent. There is much more to Asian cinema than the male-dominated films shown at Cannes and the Oscars. NYAFF is proud to spotlight an exciting lineup of titles directed and led by women:Heavy Craving from Taiwan, Lucky Chan-sil and Kim Ji-young, Born 1982 from South Korea, My Prince Edwardfrom Hong Kong, and Victim(s) from Malaysia, among others.

The CENTERPIECE film marks both a departure from genre as well as the festival’s embrace of an ever-expanding range of films: They Say Nothing Stays the Same by Odagiri Joe, one of Japan’s best-known actors, who makes a remarkable feature debut behind the camera. Odagiri is joined by a no less remarkable cast and crew: cinematographer Christopher Doyle; veteran actor Emoto Akira, who leads a star cast including Nagase Masatoshi, Asano Tadanobu and Aoi Yu, plus a rare appearance by musician Hosono Haruomi; Oscar-winning costume designer Wada Emi; and a fabulous score courtesy of Armenian jazz pianist Tigran Hamasyan.

A generous share of the program is devoted to new filmmakers, including striking directorial debuts and sophomore efforts. Integral to NYAFF’s mission is showcasing the Asian cinema vanguard that emerges largely from new talent and fresh voices. This edition reflects today’s particularly kinetic innovations, much informed by social media and the hyper information highway. An impressive cross-section of work highlights new ideas in storytelling and tackles social mores and personal demons, including Philippines’ John Denver Trending, Korea’s Beauty Water and Taiwan’s Detentionand IWeirDo, just to name a few. 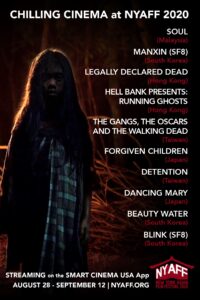 In regional terms, South Korea is front and center in this year’s selection. Faithful to tradition, the Festival presents a balance of arthouse and genre titles with an emphasis on outstanding storytelling and accessibility: Secret Zoo, Hitman Agent Jun, Moving On.

As the boundaries between what is strictly film and TV blur, NYAFF has found, in its tireless search for exciting, new content, an extraordinary example of the convergence of both formats in SF8, a series of eight stand-alone 52-minute science fiction films that will make their International Premiere at this first virtual edition. Each film is directed by prominent Korean filmmakers, and the knowledgeable viewer will recognize the names of Min Kyu-dong, Jang cheol-su, Noh Deok.

The series, first shown on Korea’s version of Netflix, Wavve, has been praised locally and has drawn comparisons with Black Mirror.

The Festival continues to champion the work of new directors and filmmakers that have not yet received international recognition with its “Uncaged” Competition section, which includes five films by first and second-time directors: (IWeirDo, Moving On, Legally Declared Dead, Victim(s) and They Say Nothing Stays the Same.)

The Hong Kong Panorama, the point of origin of the Festival, has a specific emphasis on Cantonese-language stories and the new generation of filmmakers at a turning point in the history of the Special Administrative Region.The selection features the following: the World Premiere of Hell Bank Presents: Running Ghost, the North American premieres of Memories to Choke on, Drinks to Wash Them Down; The Grand Grandmaster, Legally Declared Dead, Unleashed, the East Coast premiere of the previously mentioned My Prince Edward, and Witness Out of the Blue, one of the few and best representatives of a genre that put Hong Kong cinema on the map: the crime thriller.

Keeping continuity with the festival’s roots, this year’s edition also features Chasing Dream, the latest by Johnnie To, Hong Kong cinema’s l’enfant terrible turned patron saint. NYAFF is notable as the first festival and institution to bring the wild cinematic stylings of To and his team to the US with the groundbreaking series, “Expect the Unexpected: Contemporary Urban Cinema from Milkyway Image Productions” back in 2000.

This year’s selection of films from Japan proves as eclectic as ever with a fascinating diversity of styles and themes, by emerging and established creators. There is salient cinematic sophistication in the resonant work of returning filmmakers: Naito Eisuke’s cause-for-alarm cautionary tale Forgiven Children; Otomo Keishi’s hypnotically enigmatic Beneath the Shadow. On the other end of the spectrum is the hilariously uncomfortable cringe-com A Beloved Wife; and rounding things out are Sabu’s supernatural dramedy Dancing Mary, Mariko Tetsuya’s shocking manga adaptation Miyamoto, and more.

At a time when Hollywood and the new East Asian superpower go both head to head and hand in hand, the China selection continues to show a wide-ranging selection of titles that reflects the versatility of the mainland’s filmmaking, and puts the spotlight on new directors: Fresh off the massive success of last year’s White Snake, the programming slate includes a brand new title that shows the sudden rise of the Chinese animation sector with recent hit Mr. Miao, Li Lingxiao’s epic directorial debut. Produced by the team behind box office champion Ne Zha, the film, released in China on July 31, has drawn praise and comparisons with Studio Ghibli’s productions. Also on the menu is an original take on the scifi genre: Gone with the Light, a strikingly original feature debut by Dong Runnian, who has made a name for himself as the scriptwriter of Mr Six and Crazy Alien. The film, powered by the performances of star actor Huang Bo and an all-star female cast (Bai Baihe, Song Chunli, Wen Qi, Huang Lu), artfully marries an empowering drama with genre tropes . In addition to highlighting new talent, the Chinese selection includes Sixth-Generation director Wang Rui’s most recent work by (and one of its best to date): Mongolian-language drama Chaogtu with Sarula.

“Since the very first day of our launch, our goal is to always promote and screen the latest quality Asian films to international audiences. So it is our great pleasure to work with NYAFF, one of the most prominent Asian film festivals in the world, for their 19th edition, following our successful partnerships with Shanghai International Film Festival and Bucheon International Fantastic Film Festival. As a technology and data driven platform, we have created a unique, cutting-edge, virtual “Almighty Cinema” ecosystem to accommodate all the various demands from international festivals, distributors as well as traditional exhibitors.” said Jack Gao, founding partner and CEO of Smart Cinema.

“We are honored that NYAFF selected Smart Cinema USA to be their partner as they continue to showcase the best films from all over Asia during this global pandemic. Smart Cinema has become the premiere virtual cinema destination for movies in Asia and we are committed to replicating that success in North America.” said Doris Pfardrescher, President & CEO of Well Go USA and Board Member, Smart Cinema USA.

“At a time when the work of festivals might seem like a rearguard battle, I’m glad to take a leap into the unknown, and search east, not only for the films, but for new ways of exhibiting those films“, said Samuel Jamier, executive director and president of the New York Asian Film Festival & Foundation.

ABOUT NEW YORK ASIAN FILM FESTIVAL (NYAFF)
Now in its 19th year, the New York Asian Film Festival (NYAFF) is North America’s leading festival of popular Asian cinema, which The Village Voice has called “the best film festival in New York,” and The New York Timeshas called “one of the city’s most valuable events.” Launched in 2002, the festival selects only the best, strangest, and most entertaining movies to screen for New York audiences, ranging from mainstream blockbusters and art-house eccentricities to genre and cult classics. It was the first North American film festival to champion the works of Johnnie To, Bong Joon-ho, Park Chan-wook, Takashi Miike, and other auteurs of contemporary Asian cinema. Since 2010, it has been produced in collaboration with Film at Lincoln Center.