The Fantasia International Film Festival closed out its 2020 edition yesterday, having successfully transitioned to a cutting-edge digital event in the wake of the global COVID-19 pandemic. Canadian audiences proved dedicated to the long-running festival, and flocked to the digital edition, which saw over 85,000 spectators watch films and special events across the country and beyond. Of special interest to audiences were the fest’s twenty-five World Premiere features, including bows for COME TRUE, THE BLOCK ISLAND SOUND, HUNTED, UNDERGODS, TINY TIM: KING FOR A DAY, THE PAPER TIGERS, THE CURSE OF AUDREY EARNSHAW, PVT CHAT, SLAXX, THE OAK ROOM, and UNEARTH.

The 24th edition of the festival also saw a record amount of media coverage, with 475 accredited journalists from around the world promoting Fantasia and its ground-breaking content. From Canadian and U.S. media to popular, top-tier outlets as far away as Japan and Portugal, Fantasia’s media presence has never been stronger. The genre festival’s digital edition was featured prominently at Variety, The Hollywood Reporter, Indiewire, Screen International, Forbes, Filmmaker Magazine, NME, Premiere, and hundreds of other websites, magazines, and television programs from across the Earth.

In closing out this year’s event, Fantasia is proud to publicly announce the awards for their 2020 edition, following fourteen days of virtual screenings, events, and celebrations. The fest hosted 104 feature films, 200 shorts, and seventeen live events, including a masterclass by horror luminary John Carpenter, an artist talk with filmmakers Mike Flanagan and Mick Garris, and a special in-conversation between celebrated Canadian actors-turned-directors Jay Baruchel and Finn Wolfhard, presented in celebration of the latter’s directorial debut, NIGHT SHIFTS, which the festival premiered.

“For this visually arresting aria of a uniquely female experience, from its superb performances to its diabolical psychological landscape, the jury salutes the unflinching vision and precise execution of every single element of Daria Wosjek’s MARYGOROUND”

“From her unflinching and delightfully irreverent intentionality, to her flawless execution, this singular hand on the creative helm grabs you from the first frame and never lets go. The jury declares MARYGOROUND’s Daria Wosjek The Total Package!”

“This wild ride delivers all the hair-raising chaos of a bent but light-hearted thriller, with a star-turn on deliciously deviant dialogue for a no-punches-pulled, timely heroine you can’t stop cheering for. The jury celebrates the ruthless screenwriting of Brea Grant for 12 HOUR SHIFT.”

“A buoyant pairing of music and the characters’ emotional experience, this score exemplifies the craft of elevating a cinematic vision by acing the score’s elemental role in its story. The jury is delighted to award Shirō Sagisu the Sandro Forte Award for Best Motion Picture Score for WOTAKOI: LOVE IS HARD FOR OTAKU”

“This knock-out performance is recognized for its exceptionally demanding physicality, heart-pounding special skills, dynamic and compelling emotion and the absolutely beautiful embodiment of a flawed but timeless hero. The jury is cheering on our new favourite fighter, Jacky Heung as Tiger in CHASING DREAM!”

“We cannot rave enough. This tour de force performance is a masterclass in spellbinding stunning nuance, heart-stopping vulnerability, emotional authenticity and true comic genius. The jury is thrilled to recognize this powerhouse performance by Grazyna Misiorowska as Mary in MARYGOROUND“

JURY SPECIAL MENTION: Cho Jin-woong (ME AND ME, South Korea)

“The sophisticated and truly heart-wrenching work of one performer deserves a Special Mention: for his gripping ode to a man experiencing everything from the unnerving absurdity to existential agony of an uninvited “New Normal” with stunning grace and undeniable emotional honesty, Cho Jin-woong lifts the bar of the classic noir detective to a whole new level in his portrayal of ME AND ME’s Hyeong-goo.” 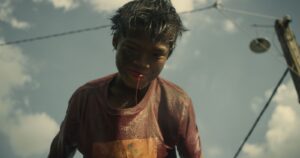 The New Flesh jury, which awards debut feature films and their creators, was presided over by director, writer, and producer Darin Scott (TALES FROM THE HOOD, MENACE II SOCIETY) and comprised of Mette-Marie Kongsved (producer of COME TO DADDY, co-founder of Nowhere), Miguel Llansó (JESUS SHOWS YOU THE WAY TO THE HIGHWAY, CRUMBS), Shinji Sakoda (international sales and film representative), and April Wolfe (critic, podcaster, writer of BLACK CHRISTMAS 2019) awarded the following prizes:

“Among fourteen quality contenders, this film was flush with actors we’d never heard of before but now anxiously await to see again, telling a visceral story of desperation with just the right amount of humor and room to breathe. For its thrilling cinematography that took us right out on the street, its economical and artful character development, and its overall inventiveness, we award Tran Thanh Huy’s ROM the New Flesh Best First Feature award.”

“Though this is the New Flesh category, this film had the distinct feeling of being Premium Aged Beef from a mature filmmaker. For its surprising structure, combining humor and magic in a deceptively simple setup, we award Jung Jin-young’s ME AND ME with a special mention of the jury”

“This dynamic lead performance took a protagonist from virginal innocence to wild, untamed experience, requiring great skill and deft to transform a character from scene to scene and often within a single scene. For her exquisite ability to anchor this revisionary tale of the Virgin Mary, we award Grazyna Misiorowska with a special mention of the jury for her role in MARYGOROUND from director Daria Woszek.”

“Sabine Ehrl’s F FOR FREAKS is an extraordinary film that utilizes genre conventions to astutely explore social hierarchy and the human condition. Providing only a glimpse of its enigmatic world, the film admirably restricts itself to an intimate scope that renders its fantastical elements tangibly real.”

“Inventive, funny and heartwarming, Marc Martínez Jordán’s screenplay for the unpredictable time travel comedy YOUR LAST DAY ON EARTH pulls off a quantity of clever plot reversals that would be difficult to manage within a feature, much less a fast-paced short film.”

“Ursula Werner carries the unique premise of F FOR FREAKS with the depth of her lead performance, allowing the viewer to perceive her character’s history through subtle gestures. A complex characterization that clarifies the film’s humanism.” 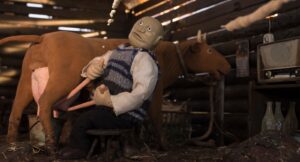 “With its impressive use of stop-motion, Oskar Lehemaa and Mikk Mägi’s THE OLD MAN MOVIE pushes the technicality of the medium to make subtle political criticism and social commentary in a sometimes vulgar, never condescending, and always entertaining story that could not be easily captured on film.”

“From a team of young, passionate filmmakers, Upamanyu Bhattacharyya and Kalp Sanghvi’s WADE is a powerful work that captures the urgency of the real-life environmental disasters facing the world today. The film gives a voice to the people and the city of Kolkata with a depth of visual research and an incredible characterization of the city itself. A timely, courageous film.”

“Adrien Mérigeau’s GENIUS LOCI is a striking marriage of visuals and sound to tell a familiar story in a unique, innovative way, using animation and an innovative narrative structure to visualize the disorientation and terror of mental illness.”

“For the very personal and unconventional handling of classic tropes; for the pleasing
narrative twists on the boxing film formula; for its fine sense of staging and for the
promise that this filmmaker represents, the jury awards the AQCC-Camera Lucida prize.
to Jung Hyuk-ki’s MY PUNCH-DRUNK BOXER.”

“In order to underline the eternal freedom exhibited in his work, as well as the playful
chaos of a film that revisits the history of Japan through its cinema, the jury wishes to
award a special mention to LABYRINTH OF CINEMA by the late Nobuhiko Obayashi.”

“For his endearing characters, his sense of staging, the originality of his drawings, and the poetry that emanates from them, the Mon Premier Fantasia Jury awards Poulain Noir – Gold to COEUR FONDANT by Benoît Chieux.”

“For its very masterful direction, its script, and its rhythm, not to forget the highly professional aspect of 3D animation, the jury awards the Poulain Noir – Silver to ŒIL POUR ŒIL by Thomas Boileau, François Briantais, Robin Courtoise, Alan Guimont, Malcom Hunt, and Mathieu Lecroq.”

“Because of its surprising black humour, simplicity, sense of rhythm, and the controlled crescendos of its gags, the Fantasia 2020 youth jury is pleased to award the Poulain Noir – Bronze to LA PÊCHE MIRACULEUSE by Fabrice Luang-Vija.”

“For its highly original way of reinventing a story as old as the world, the jury awards a special mention to ATTENTION AU LOUP! by Julie Rembauville and Nicolas Bianco.”

The Fantasia International Film Festival looks forward to returning in 2021.

The Latest from Death Cat

Official Poster and Trailer: JUNE 9 – The Unbelievable Story of the Horrors of Helltown, Ohio