From writer/director Jess Norvisgaard, and featuring a who’s who of horror, witness THE GOOD THINGS DEVILS DO now available from Gravitas Ventures.

Linnea Quigley (Silent Night, Deadly Night), Kane Hodder (Jason X) and Bill Oberst Jr (3 From hell) realize that breaking in was easy but breaking out is going to be hell.

Richard, a small-time gangster is retiring. Before he can, he must take one last job: to steal money from a rival gangster’s house. Miles apart, Melvin is a reluctant family man who has dreams of becoming a famous curator for his Museum of the Macabre. His newest acquisition? The remains of the notorious Masquerade, a vampire born from the embers of hell, slain centuries ago. On Halloween Night, their paths will collide and they’ll be forced to work together to fight centuries-old evil with everything on the line. 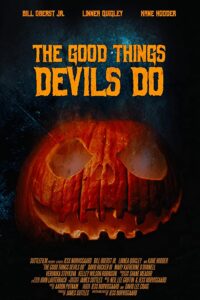 -PH: First of all, congratulations on the film. How long was it in the works for?

-Jess: Thank you! Not long; once we decided that I was going to write and direct the next project for SuttleFilm, we laid out a spreadsheet of the possible feature ideas. It began from ten, quickly whittled down to five, then three, and we decided to go with the one that was slightly ambitious for our budget, and the one that had some laughs in it as well. It was important to all of us to challenge ourselves, but keep it realistic, so to speak.

-PH: And it was completely conceived and filmed in the states?

-PH: And where specifically in the country?

-Jess: Right here in the mountains of North Carolina. We really took advantage of the working and creative relationship SuttleFilm has with it’s native Brevard, NC. The township was so kind to us, and so helpful when we needed things. It was really a special relationship that we were able to both benefit from.

Asheville, NC is unique because it’s such an artistic city. It’s really a beautiful area to shoot in, and we’re trying to show the country that this is a happening little area for the arts! 🙂

-PH: How much are those locations a star of the film?

-Jess: They have relevance. The star of the film, Bill Oberst Jr., plays a small time hood who is from a small town, where petty crooks jostle for power. Had we had more time and money, we really would’ve loved to have played out that narrative a little bit more, and showcased the cozy nature of Brevard.

-PH: Speaking of stars, I know it was very important to you that the stars not just be gratuitous cameos. Can you speak about that?

-Jess: Absolutely! A lot of movies now in this straight to VOD age, grab a star to shoot them for a day or so, and plant their faces on the cover. I get it, trust me, the industry changes and is a fickle beast, and is largely driven by the demographics and I understand the ebbs and flows of it. I get it, I do.

But it was important as a horror fan and a horror director that I did not insult my audience. The horror genre audience is fiercely loyal, but a really savvy and smart one too. They, like me because I am ALSO the audience – grew up with these actors. I wanted them to play pivotal roles. I wanted them to do different things that we’re used to seeing.

We love seeing Kane in a mask, he’s absolutely terrifying, and he is every bit as scary and maniacal in real life – but I also wanted to see him play a role, not just be Kane, but be PERCY. I challenged him, I wanted us to see inside of this madman’s mind, to be scared of Kane the man, not just the man behind the mask. Boy did he ever meet that challenge. He was a show-stopper.

Linnea Quigley had to scream, yes, and she did. But I also wanted her to be a mother, a wife, and someone who sometimes wished that she wasn’t, and that didn’t make her bad. And yes, I wanted to see her be a VAMPIRE, and she didn’t disappoint in the least!

With Bill Oberst Jr., he brought such a cerebral element into a total bastard, a man who was a doting father, but a bad father; a great criminal, but one who was just cashing checks and going through the motions. A man who was wanting out of this life, but knew he could never really leave.

I didn’t just want him for his rugged good looks, or his heel demeanor, or his recognizable voice. I wanted him to be a flawed man who was willing to be accountable for his actions, pay the price, but defy it all as well. Bill Oberst Jr. is the perfect unassuming son of a bitch but likable anti-hero. Bill was my star of the film, it was paramount that I get this right, and with him, I got this perfect.

-PH: And is this the start of a franchise, you think?

-Jess We certainly hope so! There is not a single character who’s chapter has to be closed. And yet, should we decide this story is indeed over and we can let sleeping dogs lie, I feel they all have played their parts and whether dead or alive or in between, we can let them rest knowing that closure has been achieved.

Watch the film today on On Demand and DVD!