Enter the world of Gloomhaven in a brand-new way. The world’s #1 board game is about to become the world’s next great comic in Gloomhaven: Fallen Lion from Source Point Press and Cephalofair Games. This one-shot comic is written by Travis McIntire and illustrated by Tyler Sowles and will be in comic shops Wednesday, Dec. 30th. 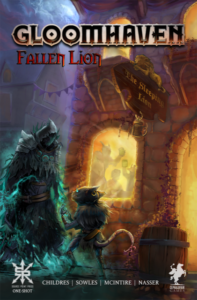 “This is our chance to tell a more visual story that isn’t beholden to the mechanics of a board
game, where we have to stop all the time and find excuses to have drawn-out dungeon battles,” says Isaac Childres, the creator of Gloomhaven. “There’s still going to be lots of fighting, of course, but the pacing of a comic and the art will allow us to inject a lot more flavor into the world. You’ll get a much better idea of the city of Gloomhaven itself, as well as the characters and how they move and act in combat.”

The City of Gloomhaven can be a tough place to make it as an adventurer and being in the right party is key to survival. The Jaws of the Lion are the top of the mountain in the hierarchy of the city, but their latest job goes sideways, and Anaphi, the mindthief, is to blame! Get ready for Quatryll punk bands, drug dealing Inox street gangs, and a dark God sleeping beneath the surface, eager to destroy the world. 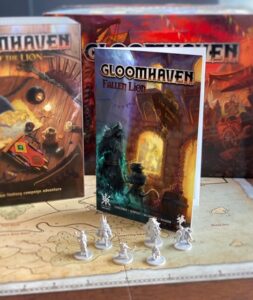 Gloomhaven is a fantasy-themed, campaign-based tactical board game for 1 to 4 players  designed by Isaac Childres and published by Cephalofair Games in 2017. It is the No. 1 rated  board game of all time by BoardGameGeek, which has also given it six Golden Geek awards in 2017 for best game of the year, best strategy game, best cooperative game, most innovative game, best solo game, and best thematic game, and the Gloomhaven franchise has been backed by over 100,000 people on Kickstarter.

“The world of Gloomhaven is one of the most rich, detailed and unique in the fantasy genre. And somehow, there was still a ton of room for us to stretch creatively, adding story details, and creating new characters. Collaborating on the first Gloomhaven comic has been a privilege and putting a tiny bit of our own stamp on a world loved by so many people has been amazing. I can’t wait for people to get it in their hands!,” says McIntire.

Source Point Press is a division of Ox Eye Media alongside Deep Water Games, publishing books, comics, and board games. ‘Gloomhaven: Fallen Lion’ will be in stores Wednesday, Dec. 30th. Welcome to the City!

Horror Channel to Celebrate the Films of John Carpenter