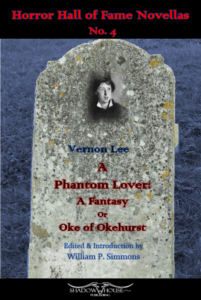 A story of death, desire, and damnation by Vernon Lee, a female pioneer of horror fiction.

A loving, but ineffectual husband, a narcissistic wife, and a vengeful spirit form the world’s weirdest love triangle in all literature. Alice Oke fancies herself the reincarnation of the tragic ancestress that murdered her paramour. Is she delusional, or will her wedding bed become her grave?

Vernon Lee (pseudonym for Violet Paget) was a feminist lesbian art critic who revealed the sublime beauty of horror and condemned social injustice. In this, her most celebrated work, she reveals the terror of the malignant past and unnatural desire.

Supernatural fiction authority, William Simmons edits and introduces this fourth volume in the Horror Hall of Fame Novellas series. As a bonus, this special edition includes the author’s pivotal essay “Faustus and Helena: Notes on the Supernatural in Art”.