Crackle Plus, a Chicken Soup for the Soul Entertainment (Nasdaq: CSSE) company and one of the largest operators of streaming advertising-supported video-on-demand (AVOD) networks, today announced the upcoming content releases planned for October.

Crackle is available in the U.S. and can be accessed on 26 devices and services including Amazon FireTV, RokuTV, Apple TV, Smart TVs (Samsung, LG, Vizio), gaming consoles (PS4 and XBoxOne), Plex, on iOS and Android mobile devices and on desktops at Crackle.com. Crackle is also available in approximately 500,000 hotel rooms in the Marriott Bonvoy chain.

This Crackle AVOD exclusive picks up the dramatic historical timeline from the film Braveheart about the liberation of Scotland. Robert the Bruce (Angus Macfadyen) finds himself abandoned, wounded and on the run from the English army. Suffering a disastrous defeat, he takes shelter with a former soldier’s wife (Anna Hutchison) and her children who save his life and nurse him back to health. He becomes a part of their family, and they become the first soldiers in his new army as he sets out to claim his long-awaited crown of freedom.

Narrated by Dr. Dre, the Crackle original documentary unfolds the inspirational journey of three-time world heavyweight boxing champion, Lennox Lewis who let nothing stop him from his relentless pursuit of becoming the greatest fighter of his generation. Follow Lennox from his turbulent youth as an aggressive brawling child along his meteoric rise through the boxing world into a world where the champ invests his energy pouring into the lives of the young people around him.

New Channels Coming to Crackle in October
This month the Crackle team is filling your bag with terrifyingly sweet treats that deliver both thrills AND chills! 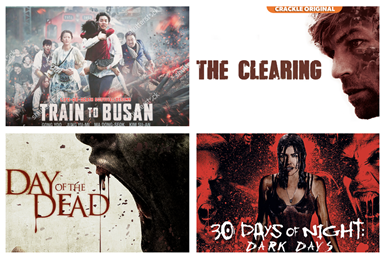 Turn out the lights, but watch your back as you check out the modern zombie classics, Train to Busan, the Crackle original tour de fierce, The Clearing, the gore-fest Day of the Dead, and a splattering of vampires with 30 Days of Night: Dark Days, plus so much more! 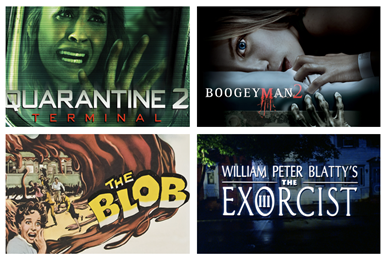 On Crackle, no one can hear you scream since they’re screaming WITH you! Lock down with Quarantine 2, the urban legend Boogeyman II, film legend The Blob, and pray for protection during The Exorcist III.

Stick your toe in to test these waters and pull back a stub! You’ll be drowning in terror with titled misnomers Lake Placid 2 and Lake Placid 3, hooked by Frankenfish, and dragged to the bottom of Shark Lake!

Don’t let the good looks fool you, these beauties are as tough as the terrors they face! Check out the high queen of scream herself, Jamie Lee Curtis in Prom Night, get stuck in House of Flying Daggers, and just try to survive Resident Evil: Apocalypse and Rise: Blood Hunter.

Just to mix things up, Crackle charges into the fray swinging the sharpest films around! Battle to improve your entertainment world with the Crackle exclusive Robert the Bruce, continuing the timeline from the Oscar-winning historical classic, Braveheart, Terry Gilliam’s 30-year-in-the-making magnum opus, The Man Who Killed Don Quixote, the swashbuckling The Legend of Zorro, and watch the cast of Merlin cast their magical spell!

Hilarity ensues when a young black woman (Zoe Saldana) brings home her fiancée (Ashton Kutcher) to meet her parents, and her dad is the one and only Bernie Mac!

Sci-fi intrigue at its BEST! This Crackle original series has it all. When police investigators start digging into the distribution of the latest synthetic club drug on the street they find more than they bargained for – mutant teens, underworld mobsters, and alien body snatchers!

This terrifying Crackle AVOD exclusive tells the story of a beautiful violin virtuoso (Freya Tingley) who inherits the estate of her estranged composer father (Rutger Hauer) after his passing. Only after she moves in does she realize her father’s obsession with secret societies, music, and the end of the world could create a horrifying symphony of disaster!

What happens when a vampire and a werewolf become roommates in a house haunted by the loveliest ghost? Watch season one of Being Human and find out for yourself!

The second installment of the classic horror film franchise has the gorgeously tough Milla Jovovich battling a reanimated army of zombies hungry for her destruction!

The third time is definitely the charm with the charmingly lethal Milla Jovovich single-handedly saving a rag-tag band of survivors in the Nevada desert battling the evil Umbrella Corp.

Just when you thought it was safe to be undead, Milla Jovovich returns again to defend a group of survivors hiding in an abandoned prison while sending zombies to the unhappy beyond.

In the sequel to the terrifying original, a young woman checks herself into a mental health facility in the hopes of banishing her fear of the boogeyman. Check the closet and under the bed before hitting play on this one!

You know the old saying “Hell hath no fury like a woman turned into a vampire.” Join Lucy Liu as she goes on a rampage of revenge against the blood-suckers who turned her into one of them.

The third installment of the horror series written and directed by the author of the original novel, takes place 17 years after the initial events and takes the story in a terrifying new direction!