2020’s ALL-NEW GHOUL LOG — October 1
Halloween’s answer to the Christmas Yule Log, the Ghoul Log is: a 24/7 streaming jack-o’-lantern (available on demand as a Shudder TV feed ‘round the clock) that offers the perfect ambience for all your Halloween festivities. This year’s edition has been lovingly crafted by a fan-favorite filmmaker who knows a thing or two about the holiday. Visit Shudder October 1 for the big reveal… (Also available on Shudder Canada, Shudder UK and Shudder ANZ)

JOE BOB’S HALLOWEEN HIDEAWAY — October 23 at 9pm ET
Horror host and drive-in movie expert Joe Bob has left the trailer park behind in favor of a more remote retreat, but he’s still ready to serve up a double feature of films hand-picked for your Halloween enjoyment. Premieres live on the ShudderTV feed Friday, October 23, and will be made available on demand on Monday, October 26. (Also in Shudder Canada) 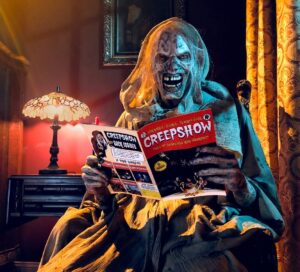 THE CREEPSHOW HALLOWEEN SPECIAL — October 26
Though Greg Nicotero and his team are hard at work shooting season 2 (coming in 2021), they’ve crafted a fully animated Creepshow special for us just in time for Halloween, featuring two tales to die for: “Survivor Type,” based on the short story by Stephen King and adapted by Nicotero, stars Kiefer Sutherland (24, Designated Survivor) as a man determined to stay alive alone on a deserted island no matter what the cost. “Twittering from the Circus of the Dead,” based on the short story by Joe Hill and adapted by Melanie Dale, stars Joey King (The Kissing Booth, The Act) as a teen whose family road trip includes a visit to the gravest show on earth. (Also available on Shudder Canada, Shudder UK and Shudder ANZ) 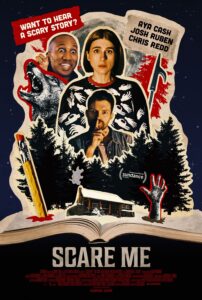 SCARE ME — October 1
Sundance 2020 Official Selection. During a power outage, two strangers tell scary stories. The more Fred and Fanny commit to their tales, the more the stories come to life in the dark of a Catskills cabin. The horrors of reality manifest when Fred confronts his ultimate fear: Fanny may be the better storyteller. Starring Aya Cash, Josh Ruben and Chris Redd. Directed by Josh Ruben. A SHUDDER ORIGINAL. (Also available on Shudder Canada, Shudder UK and Shudder ANZ) Trailer: https://youtu.be/NeYWT7CnFK0

THE CLEANSING HOUR — October 8
Max and Drew are millennial entrepreneurs who’ve made themselves famous with a webcast they created called “The Cleansing Hour,” which streams live exorcisms. The catch? Each ceremony is elaborately staged to look real in order to dupe their global audience—until today, when today’s subject, Drew’s fiancé, actually turns out to be possessed. Starring Ryan Guzman, Kyle Gallner, Alix Angelis. Directed by Damien LeVeck. A SHUDDER ORIGINAL. (Also available on Shudder Canada, Shudder UK and Shudder ANZ) Trailer: https://youtu.be/mUGfkayica4

THE MORTUARY COLLECTION — October 15
A young drifter applies for a job at the local mortuary and meets an eccentric mortician who chronicles the strange history of the town through a series of twisted tales, each more terrifying than the last. Starring Clancy Brown, Caitlin Custer, Barak Hardley, Christine Kilmer and Jacob Elordi. Directed by Ryan Spindell. A SHUDDER ORIGINAL. (Also available on Shudder Canada, Shudder UK and Shudder ANZ) 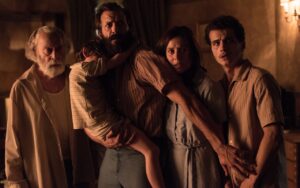 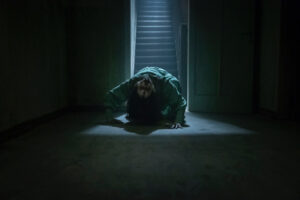 MAY THE DEVIL TAKE YOU TOO — October 29
Timo Tjahjanto has made a name for himself as one of the world’s most exciting horror directors, with standout segments in anthology films The ABCs of Death and V/H/S/ 2, and features like supernatural thrill ride May the Devil Take You and action extravaganza The Night Comes for Us. Now Tjahjanto returns with a sequel to his unforgettable 2018 hit. Two years after escaping from demonic terror, a young woman is still haunted by unnatural visions. The dangers that await her and her friends grow as a figure of darkness rises, threatening to take their lives. Starring Chelsea Islan, Widika Sidmore, Baskara Mahendra and Hadijah Shahab. Directed by Timo Tjahjanto. A SHUDDER ORIGINAL. (Also available on Shudder Canada and Shudder UK)

EVERY FRIDAY IN OCTOBER FROM 3-4PM ET
For the second year, Shudder’s head curator, Samuel Zimmerman, will be offering callers live, personalized picks for what to watch every Friday in October. Movie lovers from around the world are invited to call Sam (via a new number to be announced) Fridays from 3-4pm ET, share their mood or taste, and from that information, Sam will use his horror knowledge to select films from Shudder’s vast library for them. (Read a recap of last year’s hotline recommendations.)

We can’t promise every call will be answered, but Sam will get to as many as he can during each hour. While the recommendations are provided for free, please note that normal phone and long-distance charges may apply.

“THE PRICE OF FRIGHT” — OCTOBER 1
Terror, thy name is Price! In film history, few actors have been as closely associated with horror as Vincent Price, and for good reason. Price presented a unique brand of intelligence and refinement underscored with a delight in the macabre and a touch of madness. This Halloween, we are thrilled (and chilled) to present five classic films starring “the Merchant of Menace.”

Featuring three of Price’s acclaimed Edgar Allan Poe films directed by Roger Corman—The Fall of the House of Usher, The Masque of the Red Death and The Tomb of Ligeia—along with Theater of Blood (co-starring Diana Rigg) and The Monster Club (premiering Oct. 5) with John Carradine and Donald Pleasence. (Oct. 1 titles also available on Shudder Canada)

ALL NEW TITLES FOR OCTOBER

FROM BEYOND (Director: Stuart Gordon)
The Resonator, a powerful machine that can control the sixth sense, has killed its creator and sent his associate into an insane asylum. But when a psychiatrist becomes determined to continue the experiment, she unwittingly opens the door to a hostile parallel universe. Starring Barbara Crampton, Carolyn Purdee-Gordon, Jeffrey Combs, Ken Foree, Ted Sorel (Also available on Shudder Canada)

HOUSE OF 1000 CORPSES (Director: Rob Zombie)
This gore fest follows two young couples on their quest to find the truth about a mythical character known only as “Dr. Satan.” Set in rural Texas in the 1970s, the group gets more than they bargained for when they find themselves stranded in an all-too-realistic house of horrors. The introduction to Zombie’s now-cult Firefly clan, the director’s debut remains a vicious funhouse imbued with the savage quality of 70s terror. Starring Sid Haig, Bill Moseley, Sheri Moon, Karen Black, Rainn Wilson (Also available on Shudder Canada)

SCARE ME (see above for details)

October 8
THE CLEANSING HOUR (see above for details)

October 12
MOHAWK (Director: Ted Geoghegan)
After a member of her tribe sets an American soldiers’ camp ablaze, a young female Mohawk finds herself pursued by a ruthless band of renegades bent on revenge. Fleeing deep into the woods, Mohawk youths Oak and Calvin confront the bloodthirsty Colonel Holt and his soldiers. As the Americans seem to close in from all sides, the trio must summon every resource, both real and supernatural, as the brutal attack escalates. Starring Kaniehtiio Horn, Ezra Buzzington, Eamon Farren (Also available on Shudder ANZ)

October 15
THE MORTUARY COLLECTION (see above for details)

THEM (ILS) (Director: David Moreau)
A group of hooded strangers stalk a couple in this French horror film par excellance. Critically acclaimed upon its release, Them—along with films like High Tension, Inside, and Martyrs—hooked the rest of the world on gruesome Gallic gore-fests. Starring Olivia Bonamy, Michael Cohen, Adriana Mocca

October 26
THE CREEPSHOW HALLOWEEN SPECIAL (see above for details)

ABOUT SHUDDER:
AMC Networks’ Shudder is a premium streaming video service, super-serving members with the best selection in genre entertainment, covering horror, thrillers and the supernatural. Shudder’s expanding library of film, TV series, and originals is available on most streaming devices in the US, Canada, the UK, Ireland, Germany, Australia and New Zealand. To experience Shudder commitment-free for 7 days, visit ​www.shudder.com​.

Sally Face – The Dark Mystery Comes to an End