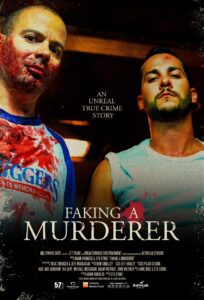 5’7 Films, the filmmaking team behind the stoner horror flick Scarecrows and the Netflix documentary hit Jack of All Trades, has joined forces once again with Breakthrough Entertainment to release their new film Faking A Murderer this fall. Produced in partnership with Hollywood Suite and Astrolab Studios, the film is set to have its world broadcast premiere on the Hollywood Suite channel on October 14, 2020. A bloody new poster and full-length trailer for the project have just been released to the public ahead of the film’s release.

Combining the on-line haziness of Catfish with the backwoods dread of Deliverance, Faking A Murderer sees director Stu Stone and producer Adam Rodness helming the project, only this time the two filmmakers appear in front of the camera as well as behind it. After discovering a chilling video on-line that seemingly includes a murder confession, Stone and Rodness assemble their team to investigate this unreal true crime story that lurks somewhere in the rural countryside. Now, the footage has been assembled into a feature length presentation which captures the origins of their investigation, the absurd moments they experience, and the harrowing stakes that continue to rise as they close in on their target. Faking A Murderer pulls back the curtain to reveal the behind-the-scenes of how true crime shows are actually produced and how well intentioned beginnings can quickly spiral out of control. 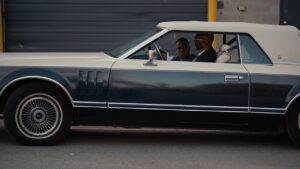 “As a die-hard fan of the true crime genre, I knew this would be an exciting project for 5’7 Films to take on next,” states Stone. “While investigating baseball cards for our documentary Jack of All Trades, we successfully managed to track a lot of people down to get the answers we needed. We figured that finding a killer would be a bold new mission for us and a huge challenge. We were right.” Rodness concurs. “We’ve obviously filmed some horror movies over the years and after we had the success on Netflix with Jack of All Trades, the next logical step for us as filmmakers was to investigate… murder. This film captures that process in its entirety.” 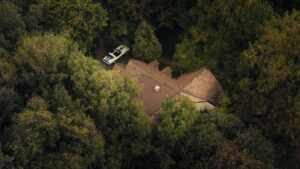 Faking A Murderer also tested the mettle of the Canadian filmmaking team as it pushed their friendship and professional relationship to the brink. “We’re brothers in law so, our relationship is really like jumping out of an airplane and this project tested that analogy to the fullest,” explains Rodness. “Stu just wants to jump right out of the plane without thinking, while I always recommend checking for a parachute first. Either way, we’ll more than likely be plummeting to our deaths together.” “Adam likes to consider himself the responsible and practical one in our company,” states Stone. “However, I always knew there was nothing responsible or practical about searching for a killer. This is the story of what went down.” 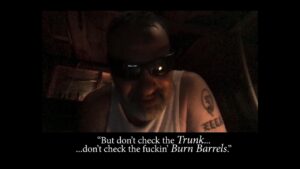 “When you take a look at Adam and Stu’s body of work, you get a real sense of how committed they are to the filmmaking process, regardless of the genre or format,” states Breakthrough Entertainment’s Feature Film Co-ordinator Chris Benn. “The footage they’ve captured in Faking A Murderer is a raw look at that process and fans of mystery and suspense are going to want to check it out from start to finish.”

Faking A Murderer was produced in partnership with Hollywood Suite, 5’7 Films and Breakthrough Entertainment in Association with Astrolab Studios, with the participation of Canada Media Fund, Ontario Creates and the Canadian Film or Video Production Tax Credit.

In search of their next hit series, two filmmakers embark on an investigation to find a man they believe to be a serial killer. Are they in over their heads? Yes. 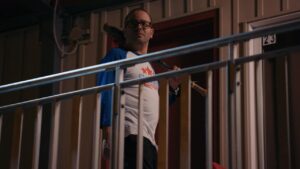 Filmmaking duo Adam Rodness and Stu Stone stumble upon a series of online videos which they believe contain a man confessing to a murder of someone named Stacy. With “True Crime” being the hottest genre in the industry, they decide that they too should cash in on the trend, creating a hit series of their own. After convincing a broadcaster this project is sure to be a success, their pitch earns them the green light. Adam and Stu hit the ground running and begin their investigation, hire a production crew and head out on the road. Only, they don’t know exactly where to start. As time ticks away and their bank account runs dry, they must go to any means necessary to deliver what they promised. What they believe to be a straightforward murder case turns into an unforgettable manhunt that could have deadly consequences for all.

Films  5’7 Films was co-founded by brothers-in-law, Adam Rodness & Stu Stone. Best known for their stoner-horror films “Scarecrows” and “The Haunted House on Kirby Road”, 5’7 Films has shown proven success in the marketplace with trending films on Netflix like “Jack Of All Trades” and the Rocky Award nominated series “The Thrillusionists” for CBC Kids. Their development and production model focuses on the independent marketplace with distribution partners such as Breakthrough Entertainment and LevelFilm. Their latest venture is the true crime project “Faking A Murderer”, which was financed in part with Hollywood Suite, the CMF and Breakthrough Entertainment. While focusing on genre specific features, the company also produces documentaries and kids programming.

Breakthrough Entertainment Inc. is an award-winning producer and distributor of premium content for worldwide audiences. The entertainment studio’s operations include the development and distribution of feature films, television and digital content; international co-productions and production services. Breakthrough’s digital media division ranks amongst the industry’s most respected producers of high-quality interactive entertainment on mobile and online platforms. Established over 35 years ago, Breakthrough’s library now boasts over 40 feature films and 4,000 television episodes which air on major networks and digital channels across the globe. The studio has been recognized with international awards including numerous Geminis, Canadian Screen Awards, and Canadian Comedy Awards.