“Revivified” is the latest project set to be released from the stables of Savage Motion Studios, an animation film production company based out of Phoenix, AZ. “Revivified” is currently being filmed by Brad Uyeda of Sav-Mo Studios, as he aims to show one of the reasons behind the current largest movement “Black Lives Matter” through horror.

“Horror has been an outlet for me to express myself and my medium of choice. Both the popularity of and themes within horror films this decade will reveal the profound effect of the social and economic crises of the times, particularly among people of color. Films such as Get out and Culture Shock served as one avenue through which horror cinema identified and dealt with the issues we are growing up bombarded by.”
-Brad Uyeda 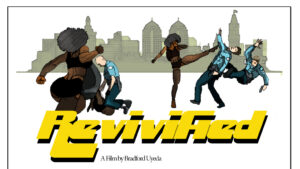 With the election of Donald Trump, the death of George Floyd and many other murdered people of color, horror films will take on a new face. But as they existed back in the 1970s, they will provide significant insight into what anxieties and fears Americans are facing at the time, and how young Americans in particular address the trauma that they grew up surrounded by.

The Revivified Kickstarter launches October 13th through to November 11th. ​More information about how to support the project can be found on kickstarter.