Season of the Dead: Supernatural Horror for Halloween

Edited and Introduction by William Simmons

TWENTY TERRIFYING TALES FOR HALLOWEEN, THE MOST FRIGHTENING NIGHT OF THE YEAR!

“The Dead return on Halloween…and this year they have a story to tell.”

SEASON OF THE DEAD: SUPERNATURAL HORROR FOR HALLOWEEN opens the veil between the living and the dead with classic and rare supernatural fiction set on or around All Hallows Eve. Genre legends and unjustly forgotten authors unearth centuries of Halloween folklore and literature with terrifying tales of witches and demons, faerie and specters. Selected from the 19th and 20th centuries, these deliciously dark narratives visit a time when the tricks were deadly, the treats horrifying, and people feared the dead.

Halloween…Samhain…Nut Crack night…Dia de los Muertos…on this night, ghosts, goblins, and ghouls cross into our realm, the familiar turns strange, and our most intimate fears are unmasked. A night of dark wonder and magic, mystery and the macabre. A Season of the Dead….

EXPERIENCE HALLOWEEN LIKE NEVER BEFORE…light your pumpkin, lock your door, and listen to leaves scurrying in the wind…the dry, rustling feet of the dead. Experience the fear and mourning, the dark joy and excitement of All Souls with terrifying tales of Halloween and the dying season of October.

Revisit October’s mingling of dread, longing, and excitement. A celebration of Old Halloween, when the monsters at your door were real, dead ancestors returned, and you could encounter a demon on any dark road. 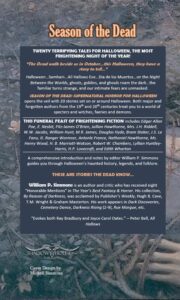 Editor WILLIAM SIMMONS guides readers through the undiscovered country with “Stories the Dead Know”, a comprehensive Introduction examining the holiday’s evolving history and customs through centuries of literature. This essay, along with Notes and Annotations creates an eerie and informative context for readers.

Available as a trade paperback and e-book at Amazon, Good Reads, and Shadow House Publishing this October. 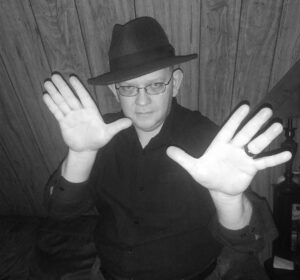 About the Editor: William Simmons is a supernatural fiction author, critic, & journalist. Eight of his stories earned Honorable Mentions in The Year’s Best Fantasy & Horror. His collection, By Reason of Darkness, was praised by Publisher’s Weekly, All Hallows & Cemetery Dance. Bestselling Graham Masterton, Hugh B. Cave & T.M. Wright have endorsed his fiction, and he has interviewed such authors as Richard Matheson, F. Paul Wilson & Caitlin Kiernan.