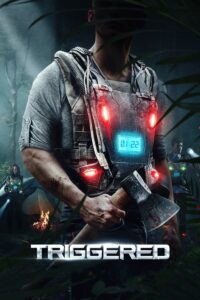 Samuel Goldwyn Films will release the thriller/action/horror film, TRIGGERED On Digital and On Demand November 6, 2020.

SYNOPSIS: Nine friends, all harboring a dark secret, go camping in the woods. After a wild night of partying, they wake up with SUICIDE BOMBS strapped to their chests, all with varying times on their countdown clocks. They decide to work out how to disarm the bombs or find help – until they discover they can ‘take’ one another’s time by killing each other.

I set out to make a film that I would watch as a teenager. I didn’t want something serious or heavy handed. I wanted to make a fun as hell midnight movie that riffs on the “Battle Royale” genre, and the types of kill game films that came before — SAW meets American Pie. I thought it would be hilarious to see sensitive, woke, SJW millennials being thrown into a grizzly death match, where they are more concerned about their own superficial feelings than the game that their tormentor wants to play. We’ve seen countless contained thrillers where strangers wake up in a room and they have to work together to get out of, or kill each other before the clock hits zero. I always found that this was a waisted opportunity. It’s so much easier to kill or torture someone you don’t know. If you put a family member, or friends, in this kill or be killed scenario, aren’t you going to get so much more mileage, so much more irony and twisted humour? How long before your defense mechanisms or politeness drops? When you have to choose between you and your long term girlfriend (who you’ve been thinking about dumping anyway), what kind of situations can come out of that conflict? We can literally have friends stabbing each other in the back. Although we encapsulate our story in something that feels like it’s been done before, we’re able to offer up a new and unique take on it which allows for a damn fun ride.

We shot the film in South Africa with a relatively unknown cast, which I just loved working with. They were so enthusiastic and gung-ho. We used our network and buddies to find the actors, with a big focus on finding kids that really embodied the casting brief. We knew it was going to be a tough shoot, with a lot of these actors walking onto a set for the first time, so we didn’t want them to have to ‘find their characters’ or ‘get in the moment’. We needed them to naturally fit who they were playing, so we could shoot fast and shoot authentic. The young cast really bonded quick and played their hearts out for 2 weeks in the woods. Some crew I pulled in from my previous films, some were new (working with me and being an HOD on a feature) but I’ve never experienced a ‘can-do’ attitude like I did on Triggered. We were hit with torrential rain during our shoot, and because we were only shooting for 15 days, it didn’t leave a lot of room for error. Everyone just buckled down and did what they needed to do and I’ll forever be grateful for the sweat they put in. With indie films in South Africa, there’s no room for ego, everyone has to play together and do it for the passion of the project, because you sure as hell aren’t doing it for the little money you’re getting paid. We also ended up with an incredibly diverse production with over half our HODs being women and people of colour. The film you set out to make and the film you actually make are generally not the same thing. But I think we used our limited resources to our advantage and ended up with a hand stitched product that we’re all very proud of. Triggered will always be special to me because it’s the first time I’ve really injected my personality into a film. Normally, I’ve gone very serious, where as this has ended up a lot more humorous than anything else I’ve done before.

While watching the film, I hope the audience jumps on board with the crazy situation the characters find themselves in. You can either route for the good guys, or you can just sit back, relax and watch the detestable characters blow themselves up in the woods. The film doesn’t take itself seriously and the audience shouldn’t either. It’s quick, it flirts with bad taste, and should be swallowed in one quick shot… like tequila at a frat party! Enjoy.
– Alastair Orr