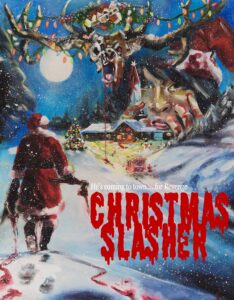 Christmas Slasher is on its way towards making film history as an 80’s style horror film that is directed and produced by Destiny Soria of Lady Destiny Productions. The film is currently well in the crowdfunding stages and has received SAG approval for feature film status. Contributors are welcome to view the Indiegogo page, donate to help fund the project, and claim a variety of rewards and perks for their contribution.

Christmas Slasher founder, Destiny Soria combines supernatural and psychological horror genres with a fresh spin on classic characters such as Rudolph and Santa. The film also features a diverse array of cast members that includes seasoned actors such as Nicholas Brendon and Carlos Ramirez.

Individuals who choose to donate to the film can claim several perks including a chance to participate in the production, Buffy the Vampire Slayer DVDs of seasons 1 and 2 signed by Nicholas Brandon, limited edition zombie teddy bears, and more.

Supporters are able to donate as much or as little as they like. Every donation comes with some sort of perk and all donations engender the gratitude of the film’s cast and crew who are already working tirelessly.

The crowdfunding site is designed to help Lady Destiny Productions cover the costs of filming including makeup, camera work, and other necessities. The film has already attracted attention, and support, from the horror community, and having the budget for necessary effects is key to future success.

Provided below are the links to the crowdfunding and social pages for Christmas Slasher.