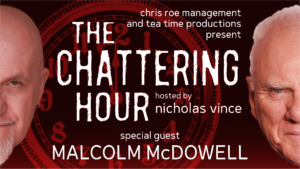 Just in time for the best holiday of the year, Chris Roe Management and Tea Time Productions will launch The Chattering Hour Youtube show and podcast hosted by Nicholas Vince (Hellraiser, Nightbreed). Each week, Vince will delve into entertainment in the horror and thriller genre and chat with special guests. Initial guests will include Traci Lords (Excision, Cry-Baby), Malcolm McDowell (Bombshell, “Mozart in the Jungle”, A Clockwork Orange), Kathleen Kinmont (Bride of Re-Animator, Halloween 4), Courtney Gains (Children of the Corn) and best-selling author Daniel Kraus. The weekly Youtube show and podcast will debut on October 8, 2020.

“Podcasts are an excellent medium and have been in a growth mode for the past few years,” commented Chris Roe, producer of The Chattering Hour and founder of Chris Roe Management. “It is estimated that close to 50% of all U.S. homes are podcast listeners and with the horror and thriller marketplace having such devoted fans, we thought it would be an excellent way to entertain during and after this pandemic.”

Host Nicholas Vince added, “I love interviewing other artists and getting their take on the craft. The Chattering Hour podcast will give me a chance to connect with my fellow actors as well as the fans.”

Nicholas Vince played The Chatterer Cenobite in Clive Barker’s Hellraiser franchise and Kinski in Barker’s Nightbreed. At the end of 2019, he performed his autobiographical one-man show, I AM MONSTERS! at the Pleasance Theatre in London as part of the London Horror Festival and to a sell-out audience in Las Vegas. He’s written and directed three short films and starred in countless independent feature films as well as having written two collections of short stories. He was awarded a Lifetime of Torment Award by Texas Frightmare, the London Horror Society Award for Outstanding Contribution to UK Independent Horror and a Dedication to Horror Award from the Liverpool Horror Club. He previously hosted a popular YouTube show dubbed Chattering with Nicholas Vince which featured indie filmmakers, actors, writers and artists. The show ended in December 2018 and had 140 episodes.

About Chris Roe Management/Tea Time Productions
Chris Roe Management was launched in 1996 by manager, writer, award-winning producer and director Chris Roe. Since then, the company has become well-respected in the entertainment industry, managing such clients as directors George A. Romero (until his passing) and Clive Barker, and actors like Bruce Davison, Meg Foster, Monte Markham, Mariette Hartley, Courtney Gains, Judy Geeson, and the legendary Malcolm McDowell, to name a few. In 2018, Roe launched his production company, Tea Time Productions, Inc.  Cemetery Tales: A Tale of Two Sisters was the company’s first production.  The phenomenal short film has already won over 40 awards worldwide, and has had over 40 additional nominations at festivals all around the globe. Roe is a proud member of the Television Academy of Arts and Sciences (ATAS), The Producers Guild of America (PGA), and a board member of the George A. Romero Foundation (better known as GARF).