JINX MEDIA LTD in association with DEADLOCKED FILMS and SUN ROCKET FILMS are delighted to announce their latest feature! 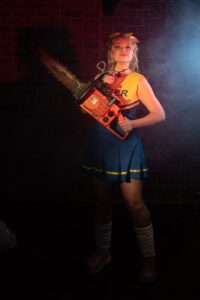 On the eve of a televised talent show, an enthusiastic but dysfunctional cheerleading troop is on the brink of falling apart. But when a cursed necklace turns their rival act into a screeching gang of zombies, the girls must learn to use their wits, friendship and assorted powertools before the TV finale takes a turn for the apocalyptic…

POWERTOOL CHEERLEADERS VS THE BOYBAND OF THE SCREECHING DEAD is a full-tilt horror/comedy/musical featuring toe-tapping songs and geysers of gore. Expect laughs, loud guitars, terrifying monsters and great songs like ‘I’m Just a Guy Dying on the Floor’. The film is being produced by Charlie Bond, who also stars as head cheerleader Emily. 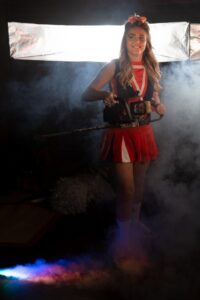 “It’s fun, fantastically self-aware and constantly ripping apart classic tropes to create a troupe of fearless, brilliant women. I had to get involved to make this happen and, as a female producer, this fun, feminist wildcard of a movie is a dream to work with” – Charlie Bond

The film is written and directed by Pat Higgins (previously responsible for cult favourites like THE DEVIL’S MUSIC and KILLERKILLER, and the original creator of STRIPPERS VS WEREWOLVES).

The film also stars James Hamer-Morton, Dani Thompson, Cy Henty, Megan Rose Buxton, Carrie Thompson, Liz Souter and Faith Elizabeth. The Kickstarter campaign at jinx.uk is offering exclusive perks including premiere tickets, downloads and even the chance to get the Powertool Cheerleaders to cheer out your name from the set! 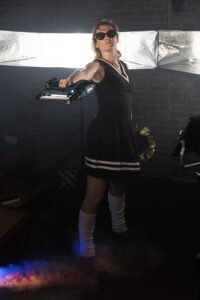 TERROR FILMS Kicks Off Friday the 13th with the Release of THE BONE BOX!