MEMORIES OF MURDER is now available on VOD 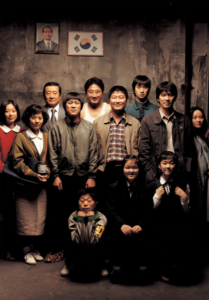 Memories of Murder tells the harrowing true story of the hunt for a sadistic serial rapist and murderer terrorizing a small province in 1980s South Korea. Marking the first of many successful collaborations between four-time Oscar winner Bong Joon Ho and leading man Song Kang Ho, the film follows the paths of three increasingly desperate detectives as they attempt to decipher the violent mind of a killer in a futile effort to solve the case. Now, seventeen years after its initial release, and a year after the real culprit was identified, this cult classic takes its place as a modern masterpiece. 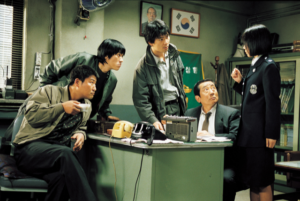 This film is based on the real-life serial murder case that happened in South Korea.

The case was severely traumatic to the Korean public, and it was a mystery that would never be solved like the Zodiac Killer inthe US or Jack the Ripper in the UK.

The victims and their families, innocent suspects who were hauled and tormented, failed detectives who found themselves in despair, people of those times who trembled with fear… This case occurred in the dark era of military dictatorship in the 80s, and truly created a further and darker abyss.

But what is surprising is that if you take a step back, this case is an intertwined web of tragedy and black comedy—the eerie comedy that blooms within the air during the most absurd of times. The film is an uncanny, yet natural, mixture of horror and comedy because we were truly living in such times.

The actual case and this film have passed through a long tunnel of time.

And now, this film will newly encounter the audience in US theaters. The case itself recently saw a dramatic turn. (Please wait until you havefinished the film before googling what happened to the actual case.)

I once threw my entire body and soul to create this film, and now my eyes are on how this film will plow through the long tunnel of time as it greets a new chapter in the fall of 2020 in the US.