Nick Stead has already been busy in 2020 having released revised additions of his debut novel Hybrid and the bloody sequels Hunted, Vengeance, as well as a new spin off novella Ascension. Fans of the series are now in for a treat as the independent publishing company Twisted Fate Publishing are now releasing the latest book in the series Damned. 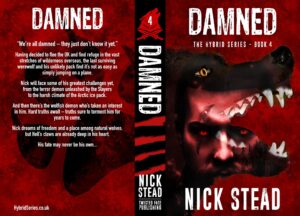 “‘We’re all damned – they just don’t know it yet.”
Having decided to flee the UK and find refuge in the vast stretches of wilderness overseas, the last surviving werewolf and his unlikely pack find it’s not as easy as simply jumping on a plane.

Nick will face some of his greatest challenges yet, from the terror demon unleashed by the Slayers to the harsh climate of the Arctic ice pack.

And then there’s the wolfish demon who’s taken an interest in him. Hard truths await – truths sure to torment him for years to come.

Nick dreams of freedom and a place among natural wolves, but Hell’s claws are already deep in his heart. His fate may never be his own…

Damned is available to pre-order for Kindle now http://bit.ly/DamnedNovel with a paperback version available next week

Hybrid, Hunted and Vengeance are all available on Kindle and in Paperback on Amazon now.

GOREWORM Blaze ‘The Path To Oblivion’ With Debut EP