The kids aren’t alright in the next nightmare comic from Source Point Press. Damned, Cursed Children terrorize the townsfolk in this five-issue mini-series written by Howard Wong and Josh Stafford with art by Robin Simon Ng, now available for pre-order and in shops Jan. 27, 2021. 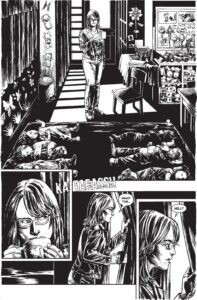 In the sudden aftermath of a series of horrifying attacks, a group of strangers are forced together in a city gone mad. How many will overcome every human instinct, and do the unimaginable to survive in a world with Damned, Cursed Children?!

“Many publishers loved Damned, Cursed Children, but were too afraid to publish it. The fearless folks at Source Point Press on the other hand got it! They understood what we were doing with the story, themes and metaphors. The spark where the story came from with characters pushed beyond their breaking point, to the incredible art makes this one of my favorite things I’ve co-created and written!” says Wong.

Inspired by the classic horror comics of the 1950s, Damned, Cursed Children explores the human condition at the breaking point in extreme circumstances. Readers will see how unacceptable behaviors become acceptable, but are they truly acceptable to survive in a world where monstrous children are trying to kill you?

“I’m a lifelong comic geek and horror movie fan. Scary kids and world-gone-mad surroundings have such a great history within the genre, and I love that here we’re adding new twists and turns. And what a pleasure to have really beautiful art from Robin Simon Ng, that I love for its feel of a black and white horror comic book of old,” says Stafford. 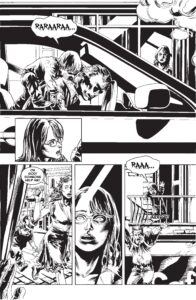 Pick up a copy of Damned, Cursed Children…if you dare!

Source Point Press is a division of Ox Eye Media, publishing books, comics, and graphic novels. Damned, Cursed Children is available to pre-order now and will be released Wednesday, Jan. 27.