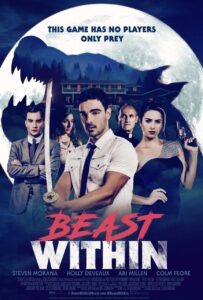 BEAST WITHIN is a creature feature stars Steven Morana (Whiskey Business) and Holly Deveaux (The Mist) as a couple attending the launch party of their gaming app Werewolves Awaken, but when a guest is mysteriously found dead, they question who could be the killer, as everyone becomes a suspect and player in a deadly real-life version of the game.

The film is now available On Demand in Canada and the US. 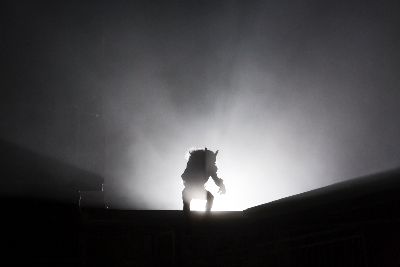 -PH: Why a horror movie, Steven?

-Steven: I actually don’t see this as a straight horror. It’s more of a combination of a murder mystery, thriller, creature-feature with a flare of comedy and romance. The unique premise appealed to me. I love how it keeps the audience guessing.

-PH: And were you a fan of similar films?

-Steven: I am an open minded person who appreciates great storytelling from all genres including horror. Being from Toronto, I frequently attended the Toronto International Film Festival and was exposed to all types of films from around the globe. 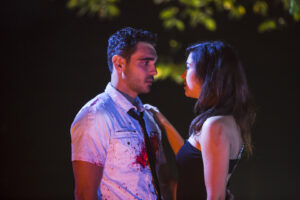 -PH: Which ones did you sit down to watch before tackling this one?

-Steven: The script paid homage to a lot of the classic werewolf films such as The Wolf man (1941), The Howling, and An American Werewolf in London. I made sure I rewatched them a few times and read into werewolf lore to get prepared.

-PH: And it was obviously important to you not to just do a straight-up horror film but one that was more unique than most?

-Steven: I like that we didn’t put ourselves in a box but just wanted to make an entertaining story that appealed to not only horror fans but fans outside of the genre as well.