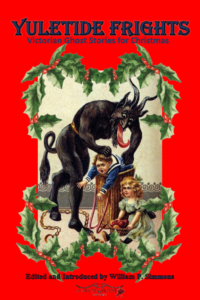 This year, Christmas belongs to the dead. Shadow House Publishing gives you tidings of terror with YULETIDE FRIGHTS: VICTORIAN GHOST STORIES FOR CHRISTMAS.

The Winter Solstice. Yule. Christmas. The Holiday season has always hid horror beneath the holly and shadows behind the merriment. Long before Christianity, Christmas Eve was a night of Pagan mystery, when humanity prayed for the sun’s return, and spirits wandered snowy midnight lanes. The Victorians popularized the tradition of telling ghost stories at this festive time of year, savoring tales of specters and otherworldly beings amidst the warmth of Holiday joy. Best-selling editor William P. Simmons invites readers to continue this shivery tradition with a collection of the genre’s most terrifying Christmas stories.

See why the Holiday season is the most frightening time of the year with 20 rare and classic supernatural stories collected from various sources, featuring a diverse array of authors, some well-known, others unjustly forgotten. This is the dark gift you’ve been waiting for–a fearful feast of Yule stories that merge the Christmas traditions of years past with timeless nightmares…and visitations that could happen to you.

Spend this Christmas with graveyard visitants and fearsome night creatures from legend and lore. Celebrate with a spectral spectacle of goblins and sprites, family curses and pagan sacrifices, doomed houses and haunted minds. Wraiths, psychopomps, demons, and the Devil himself appear to share a cup of cheer…and make you look uneasily into the shadows.

Available as ebook November 2020 at our Etsy store at etsy.com/shop/ShadowHousePub.

About the Editor: William P. Simmons is a supernatural fiction author, critic, & journalist. Eight of his stories earned Honorable Mentions in The Year’s Best Fantasy & Horror. By Reason of Darkness was praised by Publisher’s Weekly, All Hallows & Cemetery Dance. Graham Masterton, Hugh B. Cave & T.M. Wright have endorsed his fiction, and he has interviewed such authors as Richard Matheson, F. Paul Wilson & Caitlin Kiernan. He is the editor of the anthologies Season of the Dead and Monster Carnival, and of the series Horror Hall of Fame Novellas and Macabre Mistresses. More recently, his anthology Season of the Dead became a best seller on Amazon and was given a rave review by Rue Morgue.

We Are Indie Horror Film Festival