The multi-award winning horror/comedy short film Cursed World Problems is now exclusively airing on the cable and satellite television channel ShortsTV for domestic and European territories. It premiered November 15, 2020. It airs again just after midnight on November 26, December 2, 17, and 20.

“We’ve been sitting on this for about 6 months now. Our little horror/comedy has finally found a home and we are excited to show it off to everyone.” Chris Gierowski, executive producer. 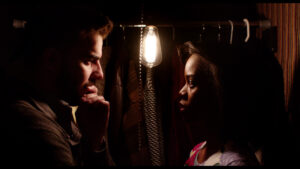 Cursed World Problems is a 9 minute short horror/comedy directed by Doug Hawley and co-written by Hawley and Ivana Darson, who also produced.

“While drinking at a bar with Ivana, I confided in her that there is allegedly a curse on my mother’s side of the family. She laughed and said, “Well, where I’m from (Montenegro), everyone’s family has a gypsy curse.” So from there, we were off and running.” – Doug Hawley, director. 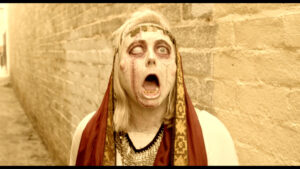 Synopsis: While visiting their parents, an expecting couple discover that there is an evil gypsy curse on their family’s bloodline and their unborn child is in grave danger.

ShortsTV is the global home of short entertainment including Academy Award nominated short films. Their team acquires professionally produced live action, animation and documentary short movies. This allows filmmakers to have their work shown around the world and exposes them develop their careers. It is owned and operated by Shorts International Ltd.