Christmas comes early to the United States and Canada as THE NIGHTS BEFORE CHRISTMAS is released across North America on digital platforms. 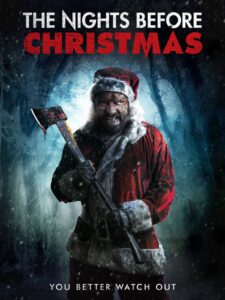 In the run up to Christmas, a murderous Santa and Mrs Claus rampage their way through a series of gruesome killings. FBI Special Agent Natalie Parker is tasked with tracking the pair of psychotic serial killers and discovering what links their victims. With the body count rising, she discovers the couple met in and escaped from an asylum for the criminally insane. As Christmas day nears, the psychotic couple slaughter their way through their special naughty list, playing a cat and mouse game with the FBI and leaving a trail of gruesome bloody bodies in their wake.

It’s been described as “fantastic,” “gory, brutal and nasty” and “a fun holiday horror gift” by horror festival goers who also said “Santa and Mrs Claus are a perfect pair… insane and deadly, with great chemistry – this is a great addition to the Christmas horror genre.”

Interview with “Blessed are the Children” Filmmaker Chris Moore