What started as a flirtatious encounter at a bar turns into a life-or-death struggle as Eve becomes the unknowing target of a misogynistic plot against her. Forced to flee as two men pursue her through the forest, she’s pushed to her extremes while fighting to survive—but survival isn’t enough for Eve. She will have revenge. A modern and radical take on the Little Red Riding Hood fable, Hunted is an exhilarating, transcendent, and frequently brutal survival tale that elevates itself with the power of myth and magic, while still holding an exacting mirror to present-day society. 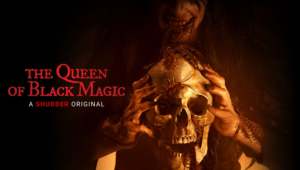 THE QUEEN OF BLACK MAGIC — January 28

The sins of the past come back with a vengeance in this new film from two of Indonesia’s modern masters of horror, director Kimo Stamboel (Headshot) and writer Joko Anwar (Satan’s Slaves, Impetigore). A family travels to the distant, rural orphanage where the father was raised to pay their respects to the facility’s gravely ill director. But his and his best friends’ homecoming turns into a terrifying supernatural ordeal that threatens their and their families’ lives: someone is using dark magic to avenge evil deeds, long buried but not forgotten. Stamboel’s film is a reimagining of the 1981 Indonesian horror classic of the same name. Starring Ario Bayu, Hannah Al Rashid, Adhisty Zara, Ari Irham and Muzakki Ramdhan.  A SHUDDER ORIGINAL. (Also available on Shudder Canada, Shudder UK and Shudder ANZ)  Trailer: https://youtu.be/9uC7_PFQgCc

The highly anticipated return of the smash hit series based on the best-selling All Souls novels by Deborah Harkness. Season two sees Matthew (Emmy-nominated Matthew Goode, Downton Abbey) and Diana (Teresa Palmer, Hacksaw Ridge) hiding in time in the fascinating and treacherous world of Elizabethan London where they must find a powerful witch to help Diana master her magic and search for the elusive Book of Life. In the present day however, their enemies have not forgotten them. Returning for Season 2: Alex Kingston (Doctor Who), Valarie Pettiford (Half & Half), Lindsay Duncan (The Honourable Woman), Edward Bluemel (Killing Eve), Aiysha Hart (Line of Duty), Daniel Ezra (All American) Aisling Loftus (War & Peace), Trevor Eve (Waking the Dead), Owen Teale (Game of Thrones), Malin Buska (The Girl King), and Gregg Chillin (Da Vinci’s Demons). A SHUDDER/SUNDANCE NOW ORIGINAL SERIES.  (Also available on Shudder Canada) Trailer: https://youtu.be/_3yMVR1LUfc

THE WALKING DEAD: WORLD BEYOND Season 1 – January 21 (all episodes)

The most recent series in The Walking Dead Universe comes to Shudder. The Walking Dead: World Beyond delves into a new mythology and story that follows the first generation raised in the surviving civilization of a post-apocalyptic world. Two sisters along with two friends leave a place of safety and comfort to brave dangers, known and unknown, living and undead, on an important quest. Pursued by those who wish to protect them and those who wish to harm them, a tale of growing up and transformation unfurls across dangerous terrain, challenging everything they know.  Starring Aliyah Royale (The Red Line), Alexa Mansour (Unfriended: Dark Web), Nico Tortorella (Younger), Annet Mahendru (The Americans), Nicolas Cantu (Vikes), Hal Cumpston (Bilched), and Emmy-winner Julia Ormond (Forever).

With a career that spanned six decades, Peter Cushing was one of the most iconic actors in horror history, bringing a profound dignity and vulnerability to every role—no matter how wild the premise or how rubber the monster. Celebrate his work with these four films from the ‘60s and ‘70s: haunted castle-set And Now the Screaming Starts with Herbert Lom, Patrick Magee and Stephanie Beacham; madhouse anthology Asylum with Lom and Magee again, plus Britt Ekland, Barbara Parkins and Charlotte Rampling; werewolf mystery The Beast Must Die with Calvin Lockhart, Ganja & Hess star Marlene Clark and Michael Gambon; and The Flesh and the Fiends (also available on Shudder Canada), a retelling of the Burke and Hare murders with Donald Pleasence.

ALL NEW TITLES FOR JANUARY

Zach and Josh are best friends growing up in the ‘90s in the suburbs—where teenage life revolves around hanging out, looking for kicks, navigating first love and vying for popularity. When a traumatic incident drives a wedge between the previously inseparable pair, their youthful innocence abruptly vanishes. Each processes the tragedy in his own way, until circumstances grow increasingly complex and spiral into violence. Starring Owen Campbell, Charlie Tahan, Elizabeth Cappuccino. (Also available on Shudder Canada, Shudder UK and Shudder ANZ)

When an employee shows up to work with a missing pinky, it awakens demons in his boss that she never knew she harbored. Starring Sabina Friedman-Seitz, Jeremy Gardner, Michael St. Michaels. (Also available on Shudder Canada, Shudder UK and Shudder ANZ)

A DISCOVERY OF WITCHES episode 201 (see above for details)

BEFORE THE FIRE (Director: Charlie Buhler)

As a global pandemic engulfs Los Angeles, rising TV star Ava Boone is forced to flee the mounting chaos and return to her rural hometown. As she struggles to acclimate to a way of life she left behind long ago, her homecoming attracts a dangerous figure from her past—threatening both her and the family that serves as her only sanctuary. Starring Jenna Lyng Adams, Jackson Davis, Ryan Vigilant, Charles Hubbell. (Also available on Shudder Canada, Shudder UK and Shudder ANZ)

A boy scout on a camping trip realizes something evil is in the woods, but the other scouts, who love to pick on Sam, don’t buy his story. What nobody knows is that a deranged poacher and his feral son have booby-trapped the entire area and are eager to test out their toys on the clueless children. Starring Maurice Luijten, Evelien Bosmans, Titus De Voogdt.

Twelve-year old Jamie is an outcast in his small town—he is bullied, he shows signs of being a sexual deviant, and he has no friends aside from his demonic teddy bear, Teddy. Influenced by commands he hears from Teddy, Jamie lures his unsuspecting tormentors one by one to a forest pit that he has discovered on the outskirts of town, so that they can be devoured by the man-eating troglodytes that dwell at the bottom of THE PIT.  Starring Sammy Snyders, Jeannie Elias, Sonja Smits.

An imaginative and somewhat disturbed young girl fantasizes about evil creatures and other oddities to mask her insecurities while growing up in rural Australia. Starring Rebecca Smart, Nicholas Eadie, Victoria Longley. (Also available on Shudder Canada and Shudder UK)

HUNTED (see above for details)

A DISCOVERY OF WITCHES episode 202 (see above for details)

At the end of the 1700’s, Catherine and Charles’ honeymoon is thrown into chaos when she is raped and impregnated by a ghost. Before long, they’ve got to contend with a murderous severed hand, a skeptical psychiatrist, and other creepy circumstances. One of Amicus Studios’ few non-anthology films, ANTSremains a superb slice of 70’s British brutality. Starring Peter Cushing, Herbert Lom, Patrick Magee, Stephanie Beacham, Ian Ogilvy.

In order to secure a job at a mental institution, a young psychiatrist must interview four patients inside the asylum and hear their terrifying stories. Starring Barbara Parkins, Richard Todd, Sylvia Syms, Peter Cushing.

A group of guests at a country house learn that one of them is secretly a werewolf in this supernatural mystery which famously included a “Werewolf Break” where audience members could guess who the guilty party is. Among the many suspects are an archaeologist, a piano player and diplomat, all of whom must submit to a series of strange werewolf tests. Starring Calvin Lockhart, Peter Cushing, Marlene Clark.

THE FLESH AND THE FIENDS (Director: John Gilling)

Horror audiences have long been fascinated by the tale of Robert Knox, a Scottish doctor who in 1828 became notorious for his complicity in a series of murders committed by grave robbers Burke and Hare, who received cash in exchange for fresh cadavers. John Gilling’s exceptionally eerie 1960 retelling, unlike John Landis’ 2010 slapstick BURKE & HARE, is historically accurate right down to Knox’s lazy left eye. Starring Peter Cushing, June Laverick, Donald Pleasence. (Also available on Shudder Canada)

Winner — Best Animated Film, Boston Society of Film Critics Awards 2020. Maria, a young woman, finds refuge in a house in the south of Chile after escaping from a sect of German religious fanatics. She is welcomed into the home by two pigs, the only inhabitants of the place. Like in a dream, the universe of the house reacts to Maria’s feelings. The animals transform slowly into humans and the house becomes a nightmarish world. Inspired by the actual case of Colonia Dignidad, “The Wolf House” masquerades as an animated fairy tale produced by the leader of the sect in order to indoctrinate its followers. Starring Amalia Kassai, Rainer Krause. (Also available on Shudder Canada)

THE WALKING DEAD: WORLD BEYOND Season 2 (see above for details)

A DISCOVERY OF WITCHES episode 203 (see above for details)

Aaron is tormented by visions of monstrous, graveyard-dwelling creatures. But his creepy therapist offers little solace. When he’s framed for serial slayings in the area, he heads for Midian, a place where undead monsters known as the “Nightbreed” live. Barker’s follow-up to HELLRAISER developed a cult following on video, and its recent restoration proves its important place in horror cinema. Starring Craig Sheffer, David Cronenberg, Anne Bobby. (Also available on Shudder Canada)

He’s pure evil… pure power… pure terror! RawHead Rex is a demon, alive for millennia, trapped in the depths of hell and waiting for release. He is held by an ancient seal, imprisoned for centuries in a barren field near the hamlet of Rathmore, Ireland. In time, this gruesome legacy has been forgotten, dismissed as an odd pre-Christian myth until Tom Garron decides to plow the field his ancestors knew better than to disturb. The seal is broken, and an unspeakable evil is unleashed. Screenplay by Clive Barker. Starring David Dukes, Kelly Piper, Niall Toibin, Ronan Wilmot, Niall O’Brien, Donal McCann. (Also available on Shudder Canada)

After a severed hand washes up on a Macao beach, Police suspect Wong Chi Hang, the new owner of The Eight Immortals restaurant, famous for their delicious pork buns. The hands belong to the missing mother of the restaurant’s former owner who has disappeared along with the rest of his family. Staff at the restaurant continue to go missing but the police can’t find any hard evidence. Can they make him talk? And what was in those famous pork buns? (Also available on Shudder Canada)

A man imprisons a violent, feral woman and enlists his family to help civilize her. Terrified of his domineering ways, his wife and daughters reluctantly go along with his plan. But his horny son needs no encouragement to start his own abusive treatment of the woman. Lucky McKee and Jack Ketchum’s shocking tale of American sadism is one of the most provocative horror films of the decade, unflinching in its depiction of extreme violence inflicted on women and the horror of unchecked male privilege. Starring Pollyanna McIntosh, Lauren Ashley Carter, Sean Bridgers, Angela Bettis (Also available on Shudder Canada and Shudder UK)

THE QUEEN OF BLACK MAGIC (see above for details)

A DISCOVERY OF WITCHES episode 204 (see above for details)

AMC Networks’ Shudder is a premium streaming video service, super-serving members with the best selection in genre entertainment, covering horror, thrillers and the supernatural. Shudder’s expanding library of film, TV series, and originals is available on most streaming devices in the US, Canada, the UK, Ireland, Germany, Australia and New Zealand. To experience Shudder commitment-free for 7 days, visit ​www.shudder.com​.