Did you know that you can find horror at BeardedGentlemenMusic.com? Maybe you did, but we didn’t until we meet Aaron Cooper. He’s one of their many great writers, and he’s been working on a fantastic Friday the 13th series called, ‘Crystal Lake Confessional.’ After seeing how much work he’s put into it we wanted to help share his series with our audience. With that, please take a few minutes to read our interview with him, and get introduced to the series, why he started it, who he’s interviewed, and more… 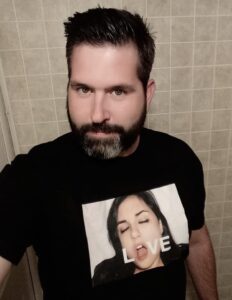 -PH: Before we get to your series, please tell us a little about yourself.

-Aaron: My name is Aaron Cooper (my BeardedGentlemen fam refers to me as ‘Coop’ haha). I live in Chicago. I write for BeardedGentlemenMusic.com. Other than that, I’m a pretty normal guy. I play guitar/bass, watch a lot of movies, collect vinyl, troll trolls on the internet haha

-PH: Did you always want to be a writer because you have an interest in music as well?

-Aaron: Yeah, ever since I was a kid I’ve had a fascination with writing. From writing stories in grade school to drawing my own comics. It was always there. With music being the other major aspect of my life, I kinda drifted into that pretty early on too. But combing them really brought out the best of them both! I take great pleasure in introducing people to music they may have otherwise missed. Indie artists are extremely important to me and I like to use any kind of platform to spread their word when there’s an opportunity to do so.

-Aaron: That’s another thing I’ve always been into! My Dad was really into horror so I was introduced to that pretty early on. My first memory of seeing a movie in a theater was Jaws: The Revenge when I was 4. So yeah, even the bad ones had a positive effect on me haha

-PH: So what is the ‘Crystal Lake Confessional’ series?

-Aaron: BeardedGentlemenMusic began as a music-only publication and was still doing that when I joined. But as the years went on and internet content creation evolved so did us writers. When we decided to cover other forms of entertainment, my wheels were already turning with ways I could be a voice for indie filmmakers as much as indie musicians or record labels. So I felt the best way to do that would be talk about films or shows embedded in the pop culture lexicon. Friday The 13th was the first thing that came to mind! So I planned out this year-long series of articles about the making of each film in the series but from a creator’s perspective. That’s how Crystal Lake Confessional was born!

-PH: There’s a lot of slashers out there so why Jason? Why Friday the 13th?

-Aaron: I think of all slasher movies and maybe even pseudo-modern horror, Friday The 13th is the most interesting in terms of production. Despite being the product of major film studios like Paramount, New Line, and eventually Platinum Dunes, they are still low budget indie films at their core. They may be simple films by design  on the outside ‘masked killer slays a group of teens’, but each and every film has been written and directed by young directors and writers. Unfortunately, that means these writers and directors had to carry the weight of big budget movies without the luxury of the support. It was important to me to tell their stories because they rarely get the opportunity to.

-PH: Talk a little about some of the interviews you’ve done. Who have you interviewed? What was it like talking to some of these stars of the franchise?

-Aaron: When I mapped out the series I knew I wanted to talk to someone involved in each of the controversial films in the series. I reached out to quite a few but I was fortunate to speak the ones I was really excited about. I interviewed Deborah Voorhees, who played Tina in Part 5. She has a pretty interesting life and is currently finishing up on a horror movie she is directing herself called 13 Fanboy. Tom McLoughlin, director of  Part 6. That film was a turning point in the series so I really wanted to hear how it came about as well as his pitch for a new sequel. I did a rare interview with Daryl Haney, the writer of Part 7. Adam Marcus was a big one too! He directed the most debated Friday movie, Jason Goes To Hell and his story is pretty wild! I also spoke with composer Harry Manfredini as well as Todd Farmer, the writer of Jason X.

Everyone has been really cool. You would think after all these years they’d be tired of talking about these niche movies but they were very accommodating. For research purposes I also talked candidly with many others of the series that didn’t make it to articles.  I not only learned a lot about the franchise but how Hollywood works as well. The good and the bad.

-PH: Who haven’t you interviewed yet that you really want to interview?

-Aaron: I really wanted to talk with some of the actors who played Jason but a few of those guys are super busy. I also spoke with Robert Englund’s publicist to pitch an interview for the Freddy Vs Jason edition. She said he was excited to check out the series but didn’t have a lot of time for press due his voice work and part on the new Stranger Things season. I was bummed he had to pass on it but thought it was really cool to hear he wanted to check them out.

-PH: Through the interviews and research you’ve done so far, what is the most interesting thing you’ve learned about the franchise?

-Aaron: As corny as it may sound, I think my biggest takeaway has been to pursue your dreams. Each of these writers, directors, etc faced their share of trials and tribulations but stuck with it and made the best films they could possibly make. Adam Marcus had me reevaluating how the industry works. That guy takes a lot of heat for thinking outside the box and it makes me wonder about some of the fans out there. The stuff  Deborah Voorhees went through post-Friday was really unfair but she still fought on and now she’s living a dream. It’s that kind of stuff that really makes me glad I got to talk with these people. It’s inspiring!

-PH: What’s next for the series? And after this series finishes do you thing you would do another for a different franchise?

-Aaron: I would say I’m kinda Jason-ed out after writing 14 articles about him over the course of a few months, but if I come up with a reason to revisit Crystal Lake I definitely will! There’s a few more non-film specific interviews I would love to do but I may take a break. As for another series on a different franchise, I think it would be a lot of fun to explore some lesser covered franchises outside Jason, Freddy, or Michael but I guess it really depends on what kind of research I can do and how long it takes to pull it together. We’ll see!

-Aaron: I love them all for different reasons! I know the fandom is crazy about Kane Hodder and I love the dude too! But I think my favorite would be Ted White from Final Chapter. There’s something about his performance (and the entire movie for that matter) that’s just unrelenting and unpleasant. I love each and every actor in each and every movie but I think Final Chapter is Jason at his scariest. As for my favorite film in the franchise, I’m going with Part 6. Jason Lives is the rock n’ roll Jason movie as well as being a love letter to the Universal Monster movies. I’m all about both!

-PH: Once all the legal stuff is worked out what do you want to see from the franchise? Another remake and start over? A sequel to the remake?

-Aaron: In my interview with Tom McLoughlin, he talks about his script for a Jason Lives follow up taking place in 1999. Its a really fun idea and I really hope it happens for him, us, and Jason! If that doesn’t get made I would love to see just another sequel to the original cannon. It doesn’t have to be a remake or reboot. Just Jason hacking up some teens again. But this time have it helmed by someone who wants an actual GOOD movie, not just dollar signs or following some sort of trend. If Blumhouse can pull it off with Halloween, I’m sure someone could do it with the Friday series. If you really want a hot take, I’d love to see Adam Marcus write another one. It doesn’t have to be a JGTH follow-up, but something where he can show off his dark humor.

-PH: Here’s your chance to promote anything we haven’t talked about. Let us know something more about the series, other projects you’re working on, what you have coming in the future, where people can find your work, or anything else you would like to mention.

-Aaron: It’s not about just me! Crystal Lake Confessional is just a tiny little part of BeardedGentlemenMusic. There are so many good content creators over there all doing stuff that showcases their talent. There’s a fiction podcast over there called AdRead. I do some acting and music stuff on there from time to time, but it’s one of the most interesting things you’ll ever listen to. Funny, horrific, and very weird. There’s also festival coverage, interviews with labels and artists. There’s comics from Super Cool And Stuff. And despite the Gentlemen in the name, the site has taken the initiative with promoting women in the entertainment industry by teaming up with Women Who Rock. That’s really cool. Being part of the publication is like a dream for me. So much talent, progressiveness, positivity and honesty. That’s rare these days in a medium overrun with grifters and people seeking validation. As for me, I’m gonna continue writing pieces about things I’m stoked about! Be it indie music, festivals, or undead murderers hacking up promiscuous camp inhabitants!

We would like to thank Aaron for taking the time to answer our questions. Hopefully this was a good introduction to his series, and gets your interest in checking it out. If you’re a fan of Friday the 13th, we think you’ll really enjoy the research, and interviews he’s done. And while you’re there, enjoy everything else BeardedGentlemenMusic has to offer as well!