‘In 1899, a Scots lamplighter facing redundancy is haunted by nightmarish visions of an electric future…

When an officious man from the newly-formed Electricity Board shows up at the Leerie’s door, he faces the loss of his craft. As his lodgings become infested with rodents, and his night-time shifts are disturbed by an unearthly spectre, he must reconcile with the future or have his light extinguished forever.’ 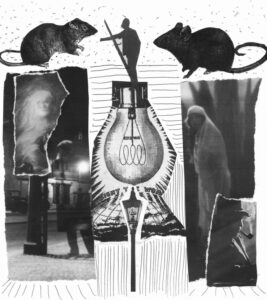 They will recreate a world with a certain style, and special costumes. They want to make the most out of their production, and get their film into festivals. However, before all of that happens they need the support of horror fans like YOU! Please CLICK THE PIC and support their film today…

-A limited release cassette tape of the score of The Leerie by composer Hannah McLoughlin, and a gorgeous printed A2 film poster designed by Jack Pell!

-Receive credit as an Associate Producer

-ZOOM calls before and after the shoot to talk about the film, and possible set visit

Visit “The Leerie” on Kickstarter to…

-Learn more about all the elements of this production

-Get introduced to the crew behind the film

-Read all of the available rewards

And if you can’t donate but want to support their campaign please share it on your social media outlets!

The Misty Moon International Film Festival, a spooky celebration of film from around the globe