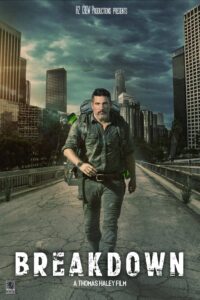 Breakdown is Thomas Haley’s passion project and has been in the works for a few years. It’s release is well timed given the current pandemic which share similarities with the film’s grim reality. After a mysterious virus has wiped out much of the worlds population, with the remaining sick being corralled in quarantine zones, as one man fights to find a cure to save humanity, and himself.

The Film has been described as a cross between “I am Legend” and “Contagion” and was filmed with a skeleton crew and a strategically spent micro budget. When asked about the film Haley had these comments:

“Months were spent in preproduction planning out where the best use our resources would really make the biggest impact. Every shot was discussed with the team to make every angle look its best.  When CoVid Hit Los Angeles, It was crazy. We had no idea how much reality would actually imitate art. We had a completed project centered around a virus and I thought lets get this out because people are going through very similar conflicts as Tim Reynolds (our Lead Character in Breakdown) and that relatability may help people feel less alone during this real life pandemic.”

Breakdown was written by cinematographer Dan Jagels, who is a frequent collaborator with Haley, this is the 13th time have worked together. When asked about his inspiration for the script, Jagels said the following:

“I have always wondered and been fascinated by what it would really be like when something like a disease or natural disaster hits the world.  But not on a grand scale like most disaster or post apocalyptic movies, but for the individual.  The one man or woman that is trying to survive, that has perhaps already lost what he holds so dear.  Would this person in turn lose themselves?  Their sense of right and wrong?  Especially if others around him have gone to the dark side, so to speak. And no one is held accountable.  This film explores that idea.  One mans journey to do what is right, especially when everything has been lost or taken from him.”

If you haven’t already, check out the trailer for Breakdown, you can watch it here:
You can rent or buy the movie on Amazon here:  https://amzn.to/3nDrFXe
You can rent the movie here: https://vimeo.com/ondemand/breakdownmovie