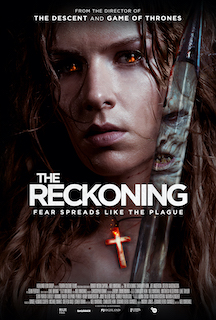 After losing her husband during the Great Plague, Grace Haverstock (Charlotte Kirk) is unjustly accused of being a witch and placed in the custody of England’s most ruthless witch-hunter, Judge Moorcroft (Sean Pertwee). Forced to endure physical and emotional torture while steadfastly maintaining her innocence, Grace must face her own inner demons as the Devil himself starts to work his way into her mind.

A STATEMENT FROM NEIL MARSHALL AND CHARLOTTE KIRK

The Reckoning was initially born out of a desire to spin a good yarn that would chill and thrill in equal measure. We love the idea of scaring the hell out of audiences and wanted to make something truly terrifying, but also unlike anything we’d seen before.

As part of the creative process we did a ton of research, and the more we unearthed about the horrific trials and tribulations thousands of women were forced to endure, we felt this story should carry a more powerful message along with the scares.  So, The Reckoning is as much about female empowerment as it is about Witch Hunts and the Great Plague of 1665. And, of course, when making the movie in 2019 we had no idea the world was about to be brought to its knees by a modern-day plague, and how that would add to the many reasons this movie is so relevant for today’s audience.

But above all, it’s a scary, entertaining and suspenseful thrill-ride and we can’t wait for you to see it.