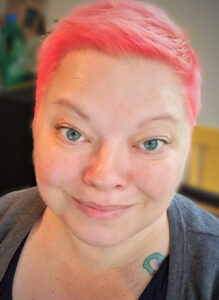 -Nicole: The first film I can ever remember seeing is The Exorcist. I was around five or six years old (so the film was a few years old at that point), and my father–who was never what you would consider a responsible parent–loaded my brother and I into his big black van, and off we went to the local drive-through for a late night showing. Instead of falling asleep and letting my dad enjoy the film in peace, I was entertained. How much a five or six year old would understand about demon possession, well, that’s a whole other story. Maybe I just didn’t know any better than to be properly scared, but I also had an imaginary friend when I was around that age–her name is Mona, and she had knives for fingers. So . . . go figure.

-Nicole: Most people would never guess that, according to scholar and writer Jessica Amanda Salmonson, as much as seventy percent of the horror fiction published in the nineteenth century was written by (white) women. I have nothing against white dudes, but when you pull up “best of” lists you’d swear the horror genre belongs almost exclusively to them. I said almost–but including Mary Shelley and Shirley Jackson on a list doesn’t give a full picture of women’s contributions to the field of horror. Women in Horror month makes space for rediscovering forgotten or overlooked women-authored horror fiction that should be considered part of the canon. But more than that, it shines a spotlight on contemporary horror writers who are women–and that’s important since the traditionally published horror world is still populated overwhelmingly by white men (at least in adult fiction–young adult fiction has done a much better job of diversifying, although there’s still work to be done in terms of inclusion). Black and brown women, indigenous women, trans people, people with disabilities, middle aged women, you name it–we all have a place in the genre, and our experiences and viewpoints make for a richer collective body of work. Small publishers are really taking the lead in publishing more women horror writers, and Women in Horror month is critical for spreading the word and normalizing an expanded and inclusive definition of who writes horror.

-Nicole: Ellen Datlow is someone I thoroughly admire–she’s done more to shape contemporary horror than almost anyone I can think of, all without being a writer. She has a real eye for great horror, and I always enjoy the anthologies and other projects that she’s got a hand in. While my ultimate goal is to have a short story published in something that she’s edited, I also find myself thinking about the fiction in the projects she pulls together, wondering what questions she’s asked of the writers while editing. I read an interview with her once in which she said that asking questions to bring out the best in a story is her approach as an editor, and I think about that when I’m reviewing others’ work.

-Nicole: I’m about to do something I’ve never done–edit an anthology. A menopause-themed anthology of short horror fiction titled Bodies Full of Burning that will be released by Sliced Up Press, the geniuses the brought us the cake-themed Slashertorte anthology (full disclosure: my short story “The North American Guide to Animal Slaughter” is included in the anthology), to be exact. My short fiction has been included in a half dozen or so anthologies, and I love reading anthologies. I always think about how stories are placed in collections. In a way it reminds of the careful way that people in my age group used to put together mixed tapes. There’s an art to it, a flow. When put together in just the right way, it makes for a super satisfying finished product. Serving in the role of editor is brand spanking new to me, and I can only hope that I manage to do the project justice.

-Nicole: The Bodies Full of Burning anthology is absolutely my baby for the next many months. Look, I’m turning 49 this month, so menopause is on my mind–and this is such an incredible opportunity. How many horror novels and films are there that focus on menstruation and/or young girls losing their virginity? Stephen King’s Carrie is a horror classic, right? The film Teeth is a classic. Just as menstruation and virginity are powerful times in a woman’s life, menopause can be just as liberating or terrifying. And if you think Carrie White at 17 can carry a grudge that manifests itself in horror, wait until we see what a middle aged or older lady with years of internalizing sexism, misogyny, racism, etc under her belt can do. I’m hoping for a truly diverse author pool to represent as many voices and experiences as possible.

Beyond this anthology, I also have some new work coming out. The Half That You Don’t See anthology from Dark Ink Books that will be released in March 2021 contains my story “Imaginary Friends,” and the Evilmas anthology from Creative James Press (due out later this year) will debut my short story “My True Love Gave to Me.” I had a story in Nico Bell’s Shiver anthology last month as well, a short piece titled “Waiting for Winter” that focuses on a special group of Final Girls. A full list of my published work is available at www.nicolewolverton.com, and you can also find me on Twitter.

We would like to thank Nicole Wolverton for taking the time to answer our questions, but more importantly for her contribution to horror!