In their continued effort to expand the digital footprint of their library to audiences around the world, indie distributor GLOBAL DIGITAL RELEASING has partnered with WATCH MOVIES NOW. Their partnership includes a a multi-content deal for their sister AVOD thriller/drama channel WATCH NOW and their documentary channel – WATCHDOKU.

The initial launch will consist of 12 thrillers and dramas and 4 documentaries. Films will include critically acclaimed films: Elizabeth Blue, Two Ways to Go West, Madagasikara and Film School Africa, amongst many others.

This is not the first time the companies have partnered. GLOBAL’s sister company, genre distributor TERROR FILMS, currently has over 30 titles on the WATCH MOVIES NOW AVOD channel!

Global Digital Releasing president Joe Dain has spoken of the partnership, recently. He says of the parternship: “we are thrilled to continue our working relationship with the team at WATCH MOVIES NOW – to bring content from Global Digital Releasing to Watch Now and WatchDoku. They have been a tremendous partner for Terror Films and we couldn’t be more pleased than to provide these films (and many others) to their new AVOD channels,” Dain concluded.

The official release of the GDR titles is set to begin early February. A complete list of the films for the initial launch can be found in this banner… 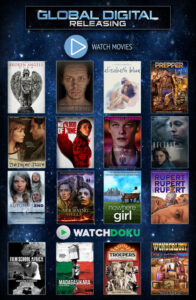 To start watching films for free (with commercials), visit the channels at…